I really struggled to get going today, don't know why it was just a massive struggle.  Not even coffee had an effect.  I got home, had lunch and took the dog out - today Archie appeared to want a walk through the woods, so that's what we did but just to add some extra mileage and the chance for me to throw the tennis ball without it getting lost in undergrowth we also crossed the road to the playing field for a short while.  A lovely 3 mile walk.


Had to wait until 6.30pm for my run as daughter was on her way home, and also it was a bit warm to go straight out. I was soon halted by this 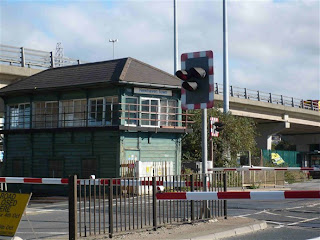 With one train already in the station and the barriers staying down that meant there was a train coming the other way so I decided rather than cross the road and use the footbridge I would stop my Garmin (mistake) and wait for the barrier to go up, which it did after a couple of minutes.  So off I set in my own little running world.   I checked my watch at the point I know is a mile from home - yes you've guessed it, it was stopped on 0.5 miles - I'd forgotten to restart it.  I decided to go a bit further - unfortunately Running Free has rounded down by total mileage.  Lesson learned - don't stop Garmin at any time!


June fact - Summer officially kicks off today, with the summer solstice marking the longest day of the year. An interesting article in the National Geographic