Sorry this post is going to be a bit long!

Great week last week, helped by the fact that I only did 4 days at work!

At the end of August I received an email on behalf of Sportsshoes.com with an invite to spend a day outdoors receiving information on running/fitness and nutrition.  So having booked a day off work I toddled off to the Velodrome at Preston Park, Brighton. There were about 10 of us there for the morning session of running and fitness, including my good twitter friend Cathy (aka @jogblog) the first time we've met in the non Twitter/blog world, and it was great to meet Jody Raynsford (aka @jodyrunssahara). 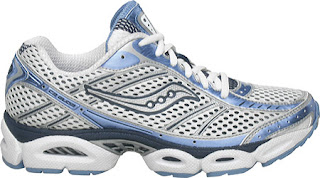 First on the agenda was a dynamic warm up with the instructor for the day, Neilon.   None of the usual static stretching but a good 10 to 15 minutes of instruction on how to warm up properly using knee lifts, star jumps etc.   After the warm up came the chance to be fitted with a new pair of Saucony running shoes.  Thanks to Ken and his able assistant, my gait was analysed and I was fitted with a very nice pair of Saucony Glide.  Once fitted with new shoes I was ready for the next session with Neilon - strength training.   He went through the correct positioning for squats and added various amounts of weight, plank/press ups and various other strength training techniques. 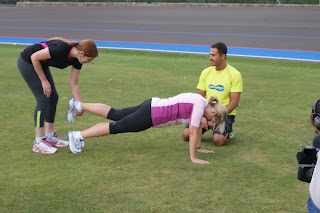 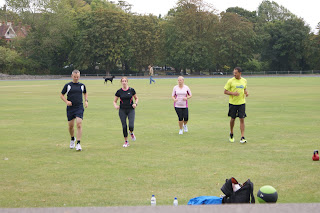 As soon as the whole group had been fitted with their Saucony shoes the part of the day I had been dreading arrived - a Kin Run.  None of us really knew what to expect from this but once we got going it was great fun.   The run took about half an hour through Preston Park itself.   After the run we did pairs stretching. 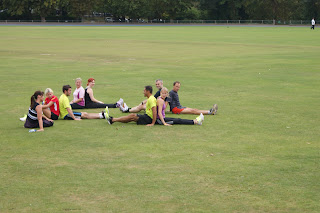 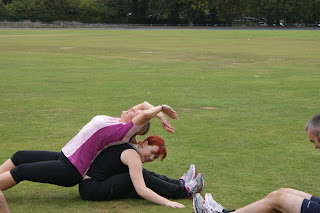 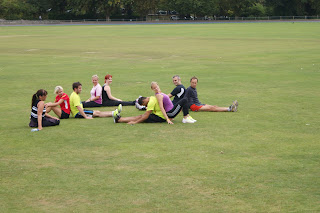 Here's a video  from Sportsshoes.com.

Lunch followed and then a talk with nutritionist, Lucy McCrickard.

Following the nutrition chat we got the chance of a Q&A session with Kevin Betts (@52marathonman), John Shippey and David Bradford (a partially sighted Club runner who is also a guide to another partially sighted runner & was an Olympic torch bearer).  All of the panel were inspiring and it was great to hear their stories.

After the Q&A we headed to Yellow Wave for a session of volleyball (too much for me!) and a delicious BBQ to round the day off.

I had the most fantastic day and huge thanks to Sophie for the invite.  Massive thanks also to the experts that gave their time too - you've given me some great ideas on how to take my fitness and weightloss goals forward.


On Saturday we took the dog & wayward teenager to my parents so that they couldn't get into any mischief whilst Mr B and I ventured on to Guildford to watch the final stage of the Tour of Britain cycling race.   A great chance to see some of my cycling heroes in action on home soil.   Unfortunately Brad Wiggins had pulled out due to a stomach bug caused by consuming cow muck probably on his water bottle and Tyler Farrar who literally crashed out on the first day.   Still in action though were the rest of the Sky Team who although had had a great start to the week with a stage win from Luke Rowe and a couple from Mark Cavendish weren't having the best week.   Jonathan Tiernan-Lock, by this stage in the leader's gold jersey has had an amazing week, and "local" cyclist, Kristian House was King of the Mountains.  Ivan Basso and Samuel Sanchez were luckily still in the race - two more faces I was hoping to spot.

We were booked into a lovely hotel - The Angel which is right on the High Street. 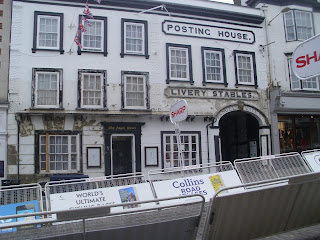 It's extremely old and currently under renovation.  We had a lovely room - the bathroom was 3 times the size of our one at home.  Very luxurious though with fluffy white robes & slippers provided.  The bed was a bit soft and unfortunately the pillows and duvet contained down - an asthmatics nightmare.   Luckily one pillow each had a synthetic filling which I swapped so I had both and the duvet had to stay away from face!  Not a good nights sleep but it was OK.   We had a lovely Italian meal in the Positano restaurant in the evening.

Sunday morning we got up early and checked out.   We walked back to the car to put the bags in and then back again to Wetherspoons for breakfast.  After breakfast we wandered up and down the High Street, which by now was beginning to look more like the finishing straight of a bike race with barriers going up and signs, and found the spot we would need to be in for the rest of the day - right by the deviation for the support cars and motorbike outriders! 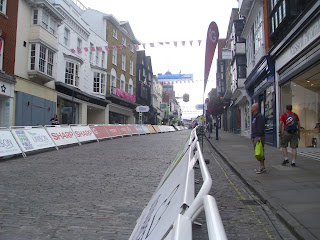 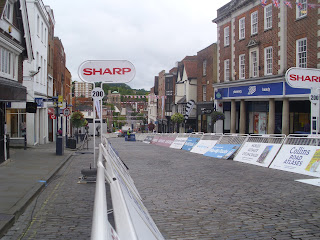 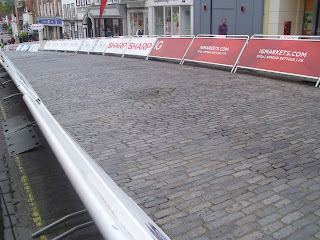 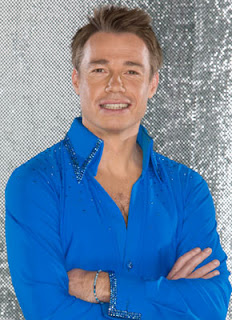 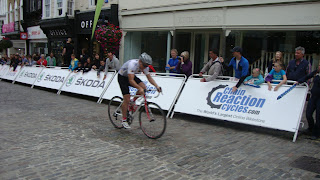 He's a great amateur cyclist!  After the initial heats we then waited for the first pass of the main event.  The build up to the riders coming through is always something special, although not quite the same as the Tour de France.  The leading riders came through, slowly enough to get some shots. 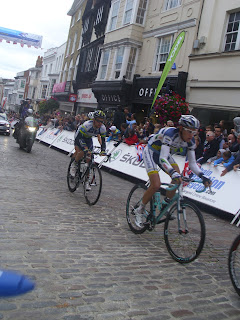 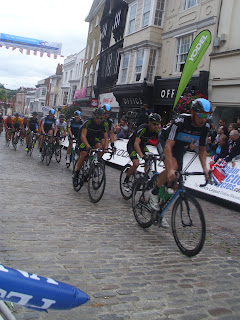 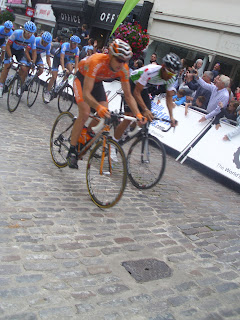 After they'd gone through the hill sprint challenge continued and although Graeme Le Saux did a great job he didn't make it into the final.  The two Tour of Britain mascots, Yeti & Toby had a race too 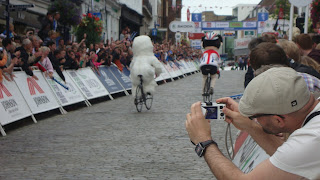 Just after 4 o'clock the build up started again and we eagerly awaited the arrival of what we had been told could be a bunch sprint finish - and by god it was one of the best things I've ever seen with Mark Cavendish leading out the bunch and winning the stage.   The atmosphere was amazing and the whole crowd erupted when he crossed the line. 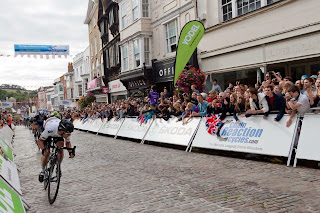 This photo was taken by Nic Stevenson  who stood next to us all day - thank you Nic for allowing me to use the photo!

Shaun did get a couple of the finish! 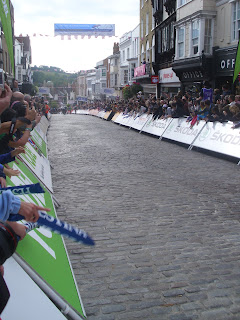 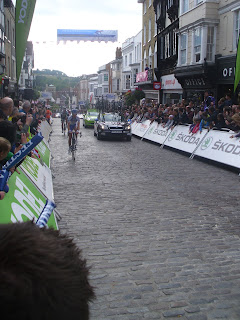 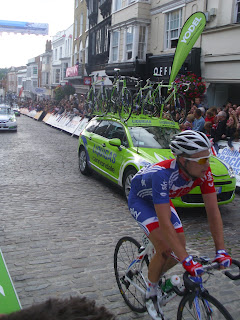 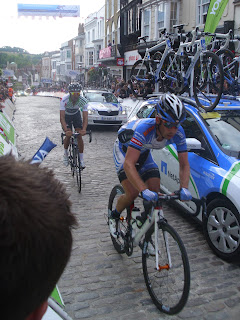 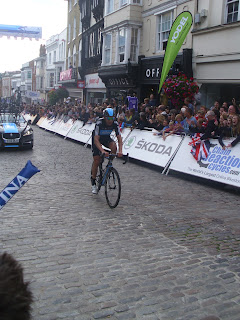 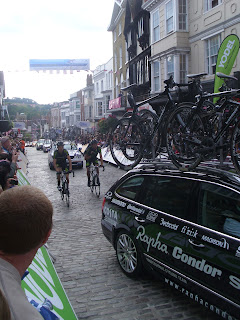 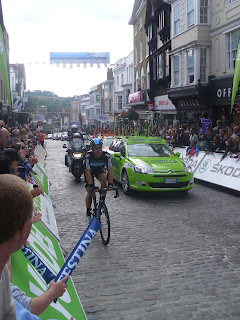 All in all a fab weekend.  Back to the running now for me with the 8k Undercliff looming large on 7th October.