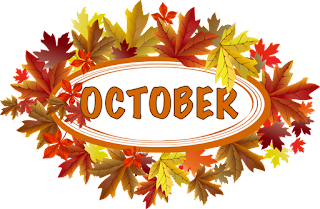 We're now firmly in autumn - maybe someone should tell the weather gods!   Not that I'm complaining although it is difficult to know what to wear.  There's a fine line between freezing cold standing at the bus stop at 7.30am and coming home and it's 25 degs at 2.30pm.   I'm still wearing my summer clothes and footwear (sadly the shorts and strappy tops have gone away) but it's becoming increasingly difficult in the mornings.

Thank god "Scroll Free September" is done with - turns out I can't cope without my occasional dip into social media during the day - terrible I know, and maybe I need to get a grip of it - or maybe there are other things I need to change, like my job!

My exercise regime has been pretty dire during September - my last class was a triple core blast, body conditioning, spin combo at the beginning and since then I've done an evening bike ride and two cycle commutes.   One of the cycle commutes was during one of the storms and meant cycling in 50mph gusting wind - bit scary.   I've now done 5 cycle commutes - the last two I cycled from home .... up the hill!   Not very pleased with myself though at riding on the pavement for a short while - it's not worth crossing the road to get onto the road and then stopping again to cross back to join the cycle path.  I only got shouted at once which was lucky.   My only other option would be to cycle downhill and into the housing estate and cycle up a really horrible steep hill to the cycle path.   I've done it once on a previous ride with Shaun, it's not pleasant!  I am going to try and cycle in again during the autumn and winter, but it will have to be a dry day when Shaun's on a rest day in case I have a problem .... .don't want to leave Archie worrying about his walkies

My lack of 'mojo' was mainly down to the fact my partner in crime has been on the "can't do a thing bench" due to an operation.  She normally picks me up and drives me to classes.   I haven't been mainly because I can't be arsed to move the car from it's precious parking space in the road or walk halfway across town if I'd driven myself and not been able to find a parking space when I got home.   I was planning on substituting classes for the gym - which is a 10 minute walk from home - but instead I've spent time packing boxes and getting rid of some of the belongings I don't want to take to the new house.

After a month we found out our buyer hadn't even started the process from his end - no mortgage, no official instruction to solicitor.   So ....... he's had a bomb up his arse from the estate agent so fingers crossed we should start to see some movement - all we want is to exchange and have a moving date.  Being in  a state of limbo is sooooooo frustrating.

I was trying to think what challenge I could set myself this month - I've signed up to do the Challenge the Norm ride in November but really need to get my general fitness back.   I've downloaded a handful of "30 day challenges" so let's see how these go.