It's been a month since my last post.   It's been a bit stressful but luckily there have been a couple of Tribby trips - one to Crowborough and a long weekend in Canterbury.   The house move continues - we've sold, found a bungalow we both love which is in the right place and has a driveway for Tribby and the car which is ace.   The paperwork is with the solicitor and we're going "with the flow".  Not easy when you're me - even the solicitor commented on how much paperwork I'd given to her!

At the beginning of the month I pledged to #ScrollFreeSeptember. 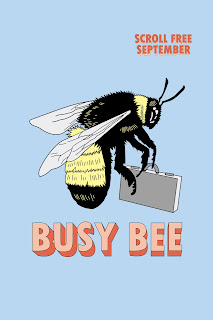 I'm not going to lie - it's been hard.   The first day was ok because I was extremely busy but I'm gradually struggling with not checking because I get a bit bored.   One thing I have realised is that I actually don't miss out on anything - it's all still there when I get on the bus at 2.45pm, apart from Twitter timeline which is a nightmare.  Just wish I could get through the day without checking it at all.   I'm going to try really hard for the second half of September - let's see how we go.

I was supposed to ride the Orro Sussex Classic Sportive last weekend but had a massive anxiety attack over my painful foot (no idea what I've done) and the elevation and I forgot to do my asthma inhalers before we left so took the decision to DNS - the first ever self imposed.  Not a great feeling - lots of tears, feeling angry at myself for giving in etc etc.  Shaun went off and rode - I sat in Tribby boiling the kettle for tea and eating anything I could find in the cupboards.   Shaun's race report wasn't great - although he did complete it in just over 2 hours.   Lots of horrible roads, cars, hills and generally not pleasant  so that made me feel better.   We did get a fab photo from the event photographer - think I might get this made into a canvas!

Following all the fun and excitement of Challenge the Norm during July I've signed up for another to do in November .   I've pledged London to Peterborough - only 86 miles for the month but I'm not sure if I'll get out on the road or not.   It could just be a month of spin classes.

Right, I'm off to pack some more boxes - will it ever end ?