Challenge the Norm is Done !

Hooray November is done and so is my Challenge the Norm cycle challenge in aid of Mind.

My original pledge was 86 miles as I wasn't sure if I could do any rides other than spin class.  It did however go better than I envisaged even though I didn't manage to get to all my planned spin classes.

To complete my miles I've cycled to work, been to spin, gone back to the gym and done the spinathon at work.  You can read about most of it here.

My second November ride to work was lovely - I managed to get my clothing right to keep warm as it's now getting colder but it was dry with a horrible easterly wind - which was good to get into work but not so pleasant on the way home.   It's on days like that you feel glad to be alive and it's always enlightening to see the sun come up!   The last couple of times I've cycled in I've wanted to keep going instead of going to straight into work.  I got in a bit too early to make an appearance at the office so I pushed on to Hove Lagoon.  I was glad I did because I was rewarded with a lovely sunrise 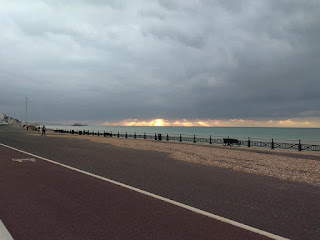 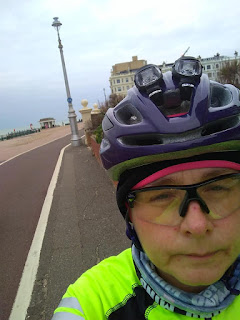 Cycling home was less enjoyable with the easterly wind and it started to rain.   I'm hoping that I'll be able to cycle in during December but I'm not doing it if rain is forecast, or high winds!

I've completed 200 miles over November and I'm now in possession of this beauty. 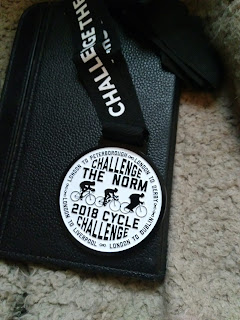 The best thing about the challenge is that I'm back in the gym and I'm goping to keep it up during December.   I'm already signed up for RED January which is similar to Janathon in that I've got to exercise every day during January.   No idea how successful it will be as Wednesdays are always a sticking point.

The arrival of December also sees the last month of the reading challenge - I'm on my last read of the year which means I should complete the 12 reads of the year.    We're already deciding the categories for 2019 but I might try and push it to 14 reads.