Bridge Climb Day has finally arrived - one of the highlights of our trip!

Thanks to jet lag I had a terrible night's sleep and was wide awake at 4am, luckily Shaun had bought a 24hr pass for the hotel wi-fi so I caught up with FB, Twitter & Skype, as it was only 2pm in the UK everyone was up and about!

Shaun woke about 7 so once we were sorted we headed out to find some breakfast.   We'd seen a programme where Rick Stein had found breakfast at the famous fish market so decided we'd do the same.  Wish I'd paid more attention - no idea where he ate but we could only find fish and freshly made sushi - not quite what I had in mind for breakfast.   It was a pretty amazing place though and I'm glad we did the walk, even if it was already 30 degs by 9am!   Probably better for lunch though!  We then headed down towards Darling Harbour where we found Rob's Cafe off the beaten track at Pyrmont Bridge and ordered scrambled egg on toast and coffee.  After breakfast we headed into the Harbour area for a look around and then back to the Town Hall where we needed to be to pick up the free walking tour.   We got there a bit early so went into the Queen Victoria Building (QVB) to enjoy some welcome aircon and to find the Pandora shop.

At 10.30 we went back to the meeting point at the Town Hall where we met our guides Ross & Justine (the founders of I'm Free).   There were a lot of people for the tour so we were split into two groups and we were taken by Justine on a 3 hour wander of the city learning about the history and seeing sights that you probably wouldn't see if you were on your own, like the birdcage alley 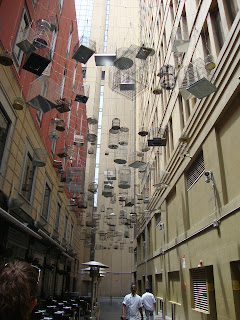 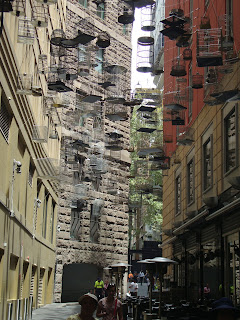 There's no birds in them but you can hear birds singing - they were put there to replace the lost birds in the city.  Extremely clever.    At the end of the tour you pay the guide what you think the tour was worth - hopefully we weren't too stingy!

After the tour we headed to the Royal Botanical Gardens for a wander and some lunch.   We made it all the way out to Mrs McQuarie's Point and had a sit down on her chair. 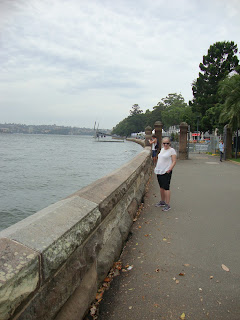 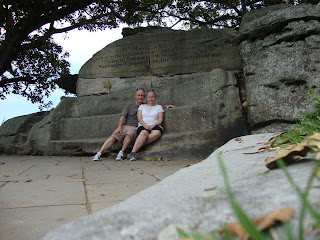 The Botanical Gardens were on the must-do list and they didn't disappoint - a haven of quiet and somewhere to take part in sport or family activity - even found a bootcamp class working out in 37 degs! 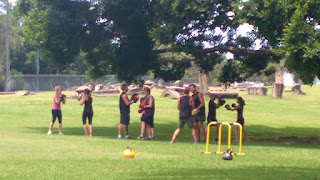 We weren't due to climb the bridge until after 4 but we decided to head back to The Rocks to recce where we had to go.   It was only about 3pm when we found the building which holds Bridge Climb Sydney so we decided to see if they could take us up earlier.   We were told that there were spaces on the next climb due to go out in 15 minutes so we went for it.   Glad we did because the group was lovely and small - only 8 of us in total plus our climb guide, Nick.

Sydney Bridge Climb is not a cheap activity but when you see how much goes into making sure climbers are safe and comfortable it's not hard to see why.   We booked ours in the UK via our travel agent which made it a little cheaper.  Once we'd be given our very fetching boiler suits and other equipment we were taken through a safety talk and a practice run and then Nick took us out onto the starting point of the climb.  As soon as my safety wire was fitted to the rail the tears started.  I'm not sure if I was scared, anxious or excited but there they were.   We slowly made our way out to the girders of the bridge and the ladders which led us up to the top.  The worst point is where you come out level with the road which carries the cars.  It's very noisy and the cars seem awfully close.  The train thunders by too but luckily I managed to miss that passing as we climbed up.  At certain points Nick stopped us to chat and answer questions and he took photos.   The views out across the harbour were amazing, the height didn't bother me at all.  Once we reached the top most point of the bridge we stopped and everyone had photos taken and a short video message.   Unfortunately we weren't allowed to take our own cameras up so I can only share with you the two photos and video given to us.
On top of the world - in our sexy climbing kit

Our tiny group of amazing people - normally groups are anything up to 16, so we were very lucky.


Hope the video works once I've posted, if not apologies!

Going down is a little bit more scary as it's on the side where the rail track is - time it badly like I did and the train goes thundering past your right ear just as you're on a ladder!   Not gonna lie - I did freeze for a bit and have to take a very deep breath before I continued down.   The whole climb takes about 3 hours, once you're back into basecamp you can get changed out of your kit, collect your photos and souvenirs - you get to keep the baseball caps - and have a wander round the gift shop.  I can't wait to wear my tshirt!   I'm so pleased Shaun talked me into doing this - I would've been really pissed off if he'd done it on his own!

Back on Terra Firma we made our way back to our hotel, on the way stopping off for a cold cider and pick up some Tiger beers and a kangaroo burger for dinner with the salad we had leftover from the previous day.