All ready to check out of our Sydney hotel at 8am we walked across the road to the taxi rank and made our way to the airport for our flight to Melbourne (pronounced Melbun).  It was only about 28 degs so a bit different to the previous two days of 35 plus!  We were sad to be leaving Sydney wishing we'd had another day at least - so much more still to see.

We had a lovely short flight with very comfy seats for a budget airline - probably more comfortable than the Malaysian A330.   Andy picked us up the other end and took us back to their house to pick up the girls and head out for lunch at the Bean Counter (a cafe we would frequent many times during the next couple of weeks).   When we arrived it was an extremely hot 44 degs - even the breeze was warm, like a hairdryer on full!   After lunch we headed back home to unpack and celebrate our arrival with bubbles and a sit in the pool, and then dinner outside!
That night was hot and sticky, the aircon wasn't working properly, but luckily we woke up to a fresher, cooler day on the Thursday.   Lou unfortunately had to work for a couple of hours so we spent the day running errands with Andy picking up school stuff, stocking up on alcohol and sorting out our bikes.

At dinner time Imogen & Miah were picked up by Kel, Lou's dad, and we headed into the city for drinks and dinner with Lou and Andy - a chance to get dressed up and have some adult time.  Lou had arranged for us to have pre-dinner drinks at the Atrium Bar Level 35 at the Sofitel so we could have a view of the city from the high skyline - totally amazing.  Lou and I picked a "Champagne Flight" - 3 tasting measures of different champagnes and Shaun & Andy chose a bottle of red wine.  The view was great - especially from the ladies toilet!
Lou had booked Taxi Kitchen - lots to choose from on the menu and I decided to go for a Barramundi fillet.  Lou also ordered some oysters (which I've never eaten).    After dinner we walked along the banks of the Yarra to watch "the Flames".  I'm being lazy here, we didn't manage to get photos so Google is my best friend at the moment!  The Flames are quite impressive.

Short journey back to Northcote and time for bed - tomorrow is Winery Tour Day! 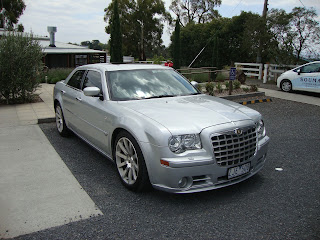 As we drove towards the wine region of Yarra Valley she explained the itinerary for the day.  We would be tasting a bottle of sparkling white, 3 whites, 3 or 4 reds and at a couple a dessert wine.

The first stop was Dominic Portet to taste some wines with a French influence.   The rose was so nice and reminded us of holidays in the south of France, we bought a bottle! 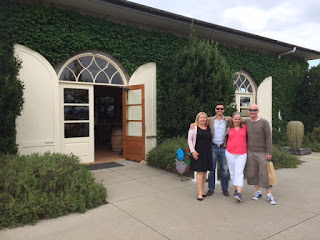 Next stop was Pimpernel where we seemed to spend quite a lot of time tasting a lot of wines and chatting to the grower.   I did manage to upset him as I didn't like any of the whites until we got to the Viognier which I'd never tasted.    He also knew of a vineyard we'd been to in Kent and described the winemaker we'd met! 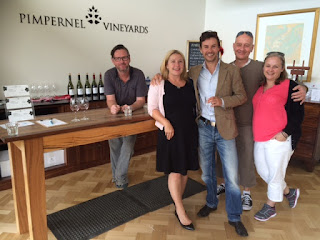 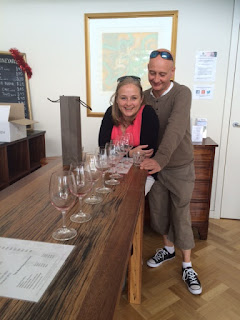 After testing all that lot we needed a break.  Bec suggested that we headed to Soumah (our next stop anyway) and have a coffee before we tasted their wines and ordered our lunch.

Soumah was a lovely venue for lunch, great views out to the vineyard and after our coffee we tasted the wines to decide what we would have with our lunch.   Shaun and I had chosen a rabbit dish and a glass of 2014 Syrah (formerly known as Shiraz).  It was great to know that we could order a box to be shipped home later in the year! 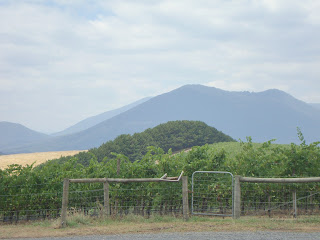 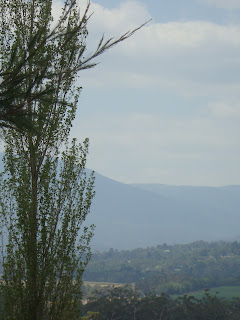 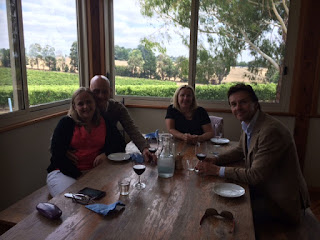 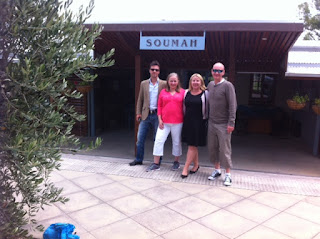 From Soumah we continued on to Maddens Rise a lovely little winery - Emma was a little worried about my white trousers and the red wine! 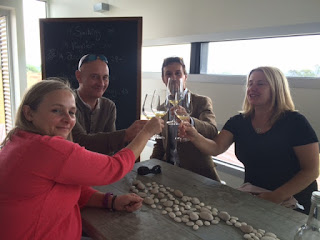 Next stop was De Bertoli wines (chosen by Lou & Andy as they had been there before a few years ago), 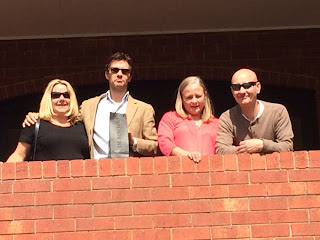 An absolutely brilliant day finished off with a slob in front of the telly eating cheese and biscuits and lots of water!!!!!   Our wine stock was replenished and we agreed to save our purchases until we went to the Grampians.

On Saturday we went back to the bike shop to pick up the bikes, the deal was we buy them and then he bought them back at the end of the holiday less £50 each bike.   We ended up buying a £50 bike which Andy wanted to keep and a £200 bike for both of us to use.  We couldn't quantify buying two bikes when I'd probably only cycle with the boys a couple of times so that was the best deal.

After the bikes were loaded into the car we headed off to Lou's dad's house at Patterson Lakes.   It's a beautiful area - if I moved to Aus this would be one of the places I'd live in. 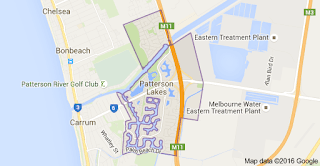 Andy suggested a bike ride before dinner so off we toddled, Shaun on the £50 bike and me on the hybrid - 20k in 25 degs - at least it was flat! 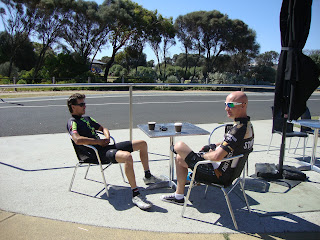 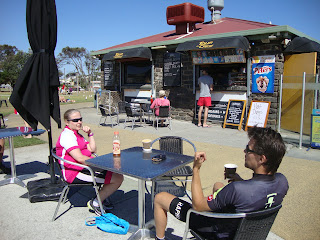 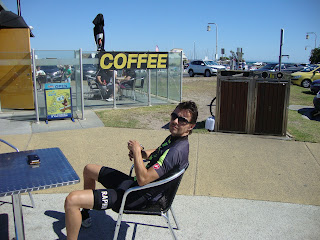 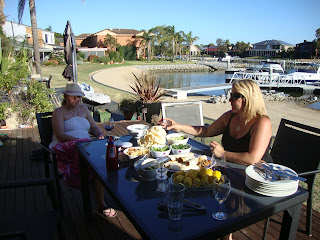 and the boys took the girls out on the kayaks 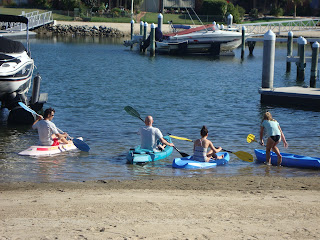 The sunset from Kel's decking was amazing! 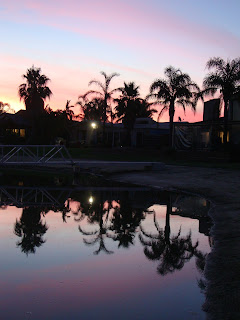 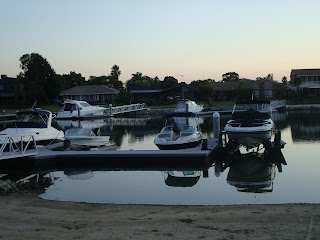 On Sunday Lou, me and the girls walked the dog down to the beach and Shaun and Andy went out on the bikes.

For lunch Lou had booked Doyles - she'd told us about the amazing food, especially the seafood platter - I had no idea how huge this was going to be 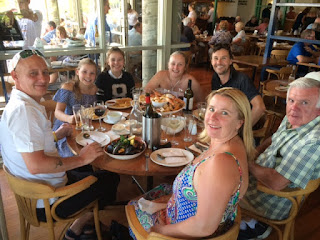 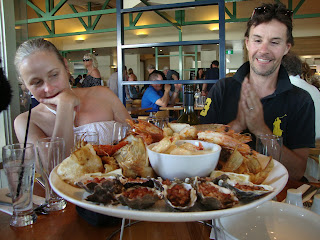 One enormous platter served with fries and a huge salad between 5 of us - that's what I call a Sunday lunch!  The girls had calamari and chips.

After lunch we went to Carrum beach and cooled off in the sea! 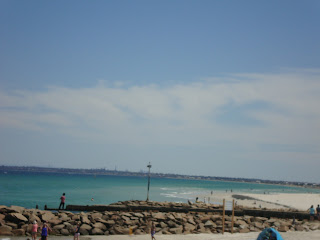 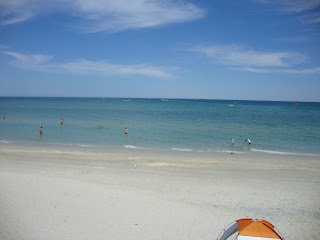 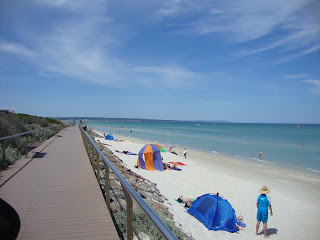 On Monday morning we headed back to Northcote to do some washing & repack for the next part of our adventure - Hall's Gap in the Grampians!
Posted by LilB at 14:22