The week when I ate too much and ran 8 Miles!

It was a really busy week last week what with Valentines Day and trying to fit in a couple of runs.

Monday was Asda shopping delivery day.  Hubby and I were alone as wayward teenager was out partying and not returning until the next day, so didn't really feel like going out.

Tuesday was a planned run day with Sue, however I hadn't been feeling too good all day and after the dog walk all I wanted to do was sleep - so run was cancelled and I had a nap before being taken out for  Valentines Day meal at  our local Italian Restaurant.   The food, as usual, was superb!

No run on Wednesday, although it probably would have been a good day for a run with all the fuel from the previous night.   Really pushed the boat out and had crumpets for dinner!

Thursday was a planned run day with Sue - so feeling very guilty at not having run for a week we went for a double Industrial Estate circuit.

Friday - no run but I did get the Lidl/Sainsbury dash done to free up Saturday.

One of the highlights of my weekend was deciding late Friday night I was going for a run Saturday morning - the reason being was that there would be no run on Sunday due to supporting family and friends at the Brighton Half Marathon.   I had only intended on my 10k route to Seaford and back along the seafront; however when I got to the turnaround point I was feeling great.  Fortunately it's quite easy to carry on for a bit longer and turn around at the cliff where the prom ends - so that's what I did!   It was pretty windy and sometimes sideways running could not be helped.   I decided that as long as I completed the 6.2 miles I'd intended to do, it wouldn't matter if I did some run/walking afterwards to get back home.  I don't know where the strength came from but I managed to stagger, shuffle "run" the whole 8 miles, not very quickly it took 1 hr 40 minutes!  My breathing was steady and although the legs didn't like the hill climb back up to the house I can honestly say that is the very first time I've run that far - pretty chuffed with myself, just hope I can do it again!  Maybe the 10 miler events aren't that far off!

So to the other highlight of the weekend - supporting my brother Steve and his girlfriend Jo and other friends at the Brighton Half Marathon.   So, up early (although not as early as the runners!) and off to Brighton I drove with daughter Danni (yes she can get up early when she feels like it - especially when there's a bribe promise of a cup of tea and sausage sandwich).   Shaun walked in with the dog, missed most of the race but made it in time for race analysis and support team meet up!

It was a lovely sunny and cold day and very busy down on Madeira Drive where the start/finish line is.   We have a great way to support everyone - blowing vuvuzela.   They make a great noise if a little annoying and hard going on the lips, especially after 2.5 hours.   Don't think we will be able to use them for the Marathon -
don't think the lips will cope with it. 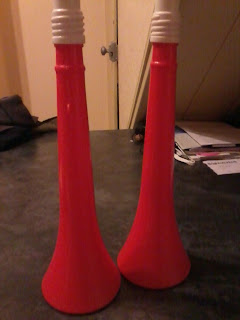 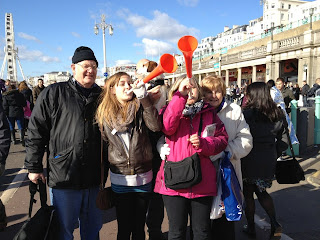 Lots of controversy over the length of the course but now everything's been sorted out - my brother's girlfriend managed a PB, and Steve was a couple of minutes off his! It was great to see so many runners taking part -I think I will be running in this event eventually - if only for the fab medal! 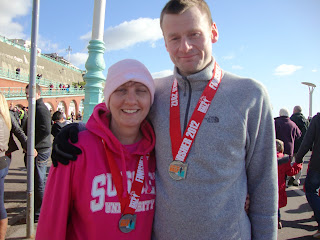