February 4th - Forgive me Father for I have sinned!

So it's Saturday 4th February.  Forgive me father for I have sinned - I haven't donned my running kit since Tuesday 31st January (the last day of Janathon).

I did go to my first ever Zumba class on Wednesday but to be honest it wasn't the greatest experience.

I have never been blessed with co-ordination, I was rubbish at step aerobics and I could never do the rub your tummy whilst patting your head.   It's always been a case of "you can have arms or legs, but you can't have both at the same time.    Zumba was therefore attended with trepidation.  Dani wanted to go too, but she declared she wouldn't stand anywhere near me.  She's already done a couple of sessions in PE at school so she knows more or less what she's doing.   Anyway, the "leader" is a bit of an Italian Stallion type - a bit like Gino the chef on This Morning.   All the "regulars" were at the front of the class, looking very confident so when I couldn't follow him I followed them.   It was all a bit of a disaster and if I'd been there on my own I probably would have left at the half hour point.   I kept on telling myself to hang on in there and the fun feeling would come.  It's all supposed to be about having a good time and hey how can you possibly know the moves when you've never been before.   Well, unfortunately, when I do something I like to do it properly so I felt like a complete numpty.  You're also supposed to feel like you've been on a dancefloor for an hour - I didn't even break into a sweat.  I think I'll give it another couple of goes but to be honest I think I'm better off running (and I'm not particularly good at that).

In other news - I have also fallen off the wagon for #nocoffeefeb.   I was doing really well up until today.  Everyone might think, oh it's easy not to drink coffee, you just don't reach for the jar, but when I tell you I am responsible for making sure that my 35 colleagues are supplied with coffee each day you will see that it's not quite as simple as that.   Every morning I have to refill the coffee machine, clean it and test it!  It's been very hard not to drink the tester - instead I've tipped it away and pretended to everyone it tastes lovely.  Instead I have been drinking Lemon & Ginger Tea and a low calorie hot chocolate drink.   That is until today, when obviously I am not at work.   Hubby stopped at a petrol station to fill up - dangerous territory when it has a Costa in it!  Anyway, he bought me my usual skinny latte.   To be honest it was the worst one I've ever had and I ended up tipping most of it away when we got home.  Complaint on it's way to Costa for that one.  Maybe I'll just stick to no coffee during the week rather than trying to kill myself not having any at all!

So, it's 9.15pm on a Saturday night - there's nothing on the telly worth watching and we're waiting for the snow to arrive.   Twitter has been alive all day with snow reports, but I don't think we're going to get any.  I have a run planned with Sue tomorrow morning so it's going to be interesting.  She's already said she's only going if it's not laid, but I would quite like to give it a go, mainly because I've failed all week to get out.   I'm not too good in the cold, and even going for a walk with Archie has meant numerous layers - god only knows what I'm supposed to wear.  I hate running with lots on because I get so hot and end up tying everything round my waist.  So here's hoping no snow will mean a couple of layers and a scarf and gloves.

It's also weigh in day tomorrow and I think my lack of exercise will mean a gain, last week was a plateau so it's not looking good.

While we're waiting for the snow to arrive here's some photos from the snow at the end of 2010 - unprecedented in Newhaven! 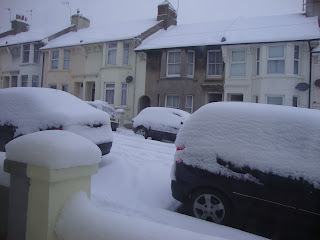 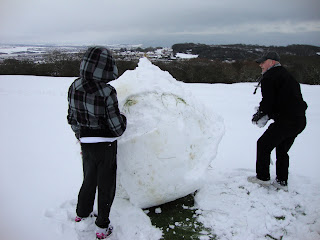 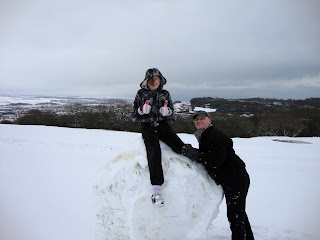 Spoke too soon, the snow has arrived whilst I've been proof reading and salivating over Becks on Wossy!
Posted by LilB at 13:37