The One Where I Ran in The Snow (well slush)

You know that saying about there being a first time for everything, well today was one of those days.  Normally when it snows I'm the first one to say I'm back off to bed.   I hate snow and I hate being cold, so why on earth would I want to strip down to a layer of lycra and go for a run?   Well the problem is that if someone goads me into doing something I normally can't resist a challenge.

I got up this morning to find a layer of snow - not a huge amount, probably less than an inch.  The night before there had been a lot of talk on Twitter about running in the snow and whether it was a good idea.   I did have a run booked with Sue so I decided to go for it, even if she didn't want to.   First thing was deciding what to wear. 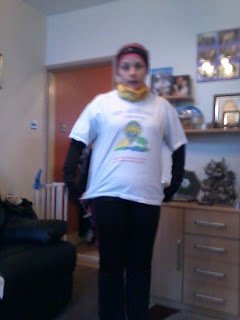 Two long sleeve running tops and an old Tshirt, two pairs of gloves my running tights with the thigh protection panels, and my running jacket.          Next, risk assess running area 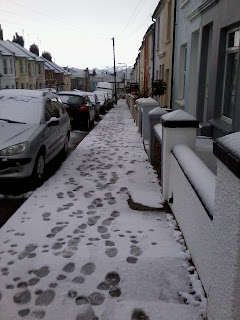 We decided not to run until we were on the flat, the closer we got to the main road the slushier it got.  We managed a very wet 5.6k in 44 minutes.   Not very fast but it was more about getting out in it, not setting any PBs.  By the time we got back we were soaked, but it was certainly exhilarating being out in it, lots of people telling us we were mad to be running.  We didn't slip once and we only stopped to wait for traffic - all in all a good run!

Whilst I was out running Shaun was out with Archie, walking up to the Downs on the other side of town.   They look like they had a great time. 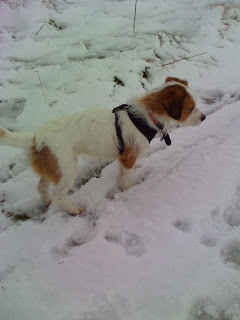 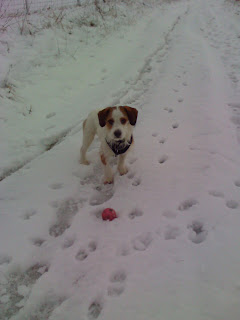 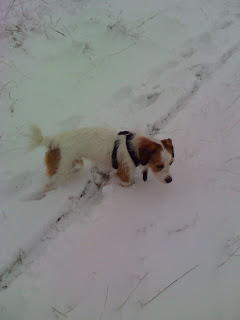 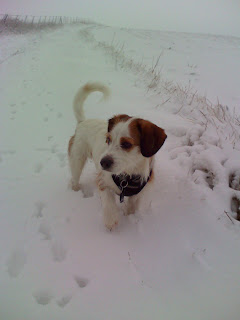