Not much has happened since my last attempt in October.    I completed the Brooks Brighton 10k 3 minutes faster than the British 10k in July which I'm pretty chuffed about - 1 hr 9 mins is not that brilliant but it was an achievement for me.   I would have been happy for 1 hr 10 mins but the extra minute has been a great boost.

On the running front I've got myself a run buddy.   I'm not sure if it's doing me any good - we spend a lot of time talking and of course running even if it is a bit slow.   It does mean that I can't really concentrate on what I'm doing speed and distance wise but then it is dark so is it more important that we are just getting out there?   I think the answer is yes - we are hoping to get out and do some weekend running in the daylight so hopefully we can push each other to improve.  We've already managed to push each other to go out when the weather has been less than favourable.

I've also taken part in a 5k Santa Fun Run with my brother and his girlfriend and a Twitter friend.  It was a very funny day with 200 santas running round Reigate Priory Park.   There were many wardrobe failures and I think I'm right in saying that we were the only ones who had "pimped" our outfits by adding bells and a name badge.  It was a horrid day weather wise and my finishing time, thanks to a bad breathing spell, was rubbish.   Still never mind it was all for fun - apparently - and the mince pie was reward enough for getting over the finish having completed the full distance! 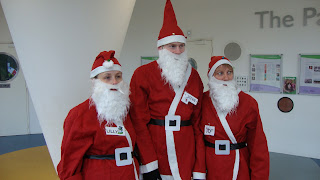 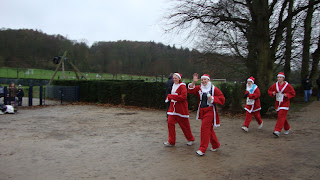 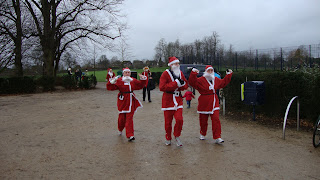 I now have to decide what events I'm doing next year.   I'm obviously going to do the Race for Life and the Rise Undercliff - I'm also considering increasing the distance and going for a 10 miler in March.   This is going to be a massive challenge and I'm not sure if it's a step too far!   Shaun's not keen on me doing longer distances so I think 10 miles will be the furthest I will do.

So, Christmas is coming - I can't believe it's only 10 days away.

I've decided to join in with Janathon - all will become clear in January (funnily enough).   I won't win because most of the time I will only be walking, some days I will be walking & running and other days I will only be running.  Other people will be running every day and not little 5k jobs and also some will probably cycle.    I'm hoping to get back to the gym too - just in case the weather turns bad and I can't get out running.   Janathon will mean that I will have to exercise and I will have to blog - I'm quite looking forward to doing it and seeing what everybody else is getting up to around the world.

So that's it for now - sorry this is so boring.   My next blog will hopefully be more humorous!
Posted by LilB at 12:16