Tribby's Travels - A spot in the woods!

Shaun was on a long weekend off so he did the shopping and packed the van up whilst I was at work - on the road by 4pm to Graffham Caravan & Camping site in Sussex.   Doris (my trusty bike) was on the back too.  When we arrived at the site Shaun spotted that there was a fish & chip van parked up so instead of tucking into the homemade lamb casserole I'd made we had some very nice fish & chips.  He'd also bought some very nice wine from Majestic too - Two Hands Angel's Share Shiraz (Australian of course).  We managed to stay outside until nearly 10pm, something we haven't been able to do so far this year!

The site at Graffham is lovely - each pitch is in it's own "glade" among the trees so very secluded.  Full of kids because it was the end of the half term holidays but most of them went home on Saturday. 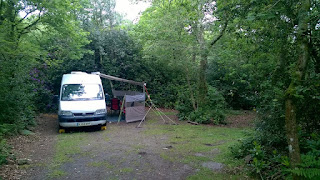 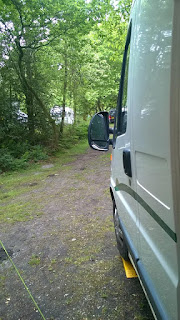 After a fantastic nights sleep we got up, I got ready to take Doris on a lovely bike ride (we'd chosen a route on my bike GPS that meant I would only be out for about an hour and a half).   While I was out Shaun explored some of the footpaths that lead from the site - lots of places to walk Archie! 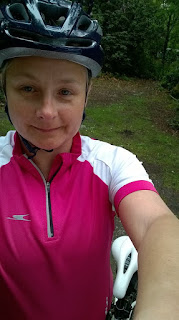 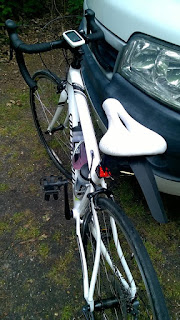 Unfortunately the bike ride didn't quite go to plan and I ended up getting lost thanks to the Garmin trying to take me down public footpaths and bridleways so I was out for over 2 hours.  Lots of frantic phone calls to Shaun to guide me back in.  I was on the right track just going the long way around!  It was actually a very nice route, lots of hills to practice for my event next Sunday (12th).

When I got back Shaun had made some lovely poached eggs, ham & avo on sourdough which was consumed in about 10 secs flat!   We walked into the village to find the shop and bought some cake, and some eggs from an honesty box on the way back.   Saturday dinner was the lamb casserole we'd saved from the previous night, washed down with a bottle of Yering Station Pinot Noir. 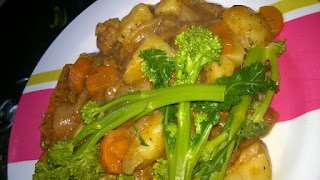 We stayed out again until quite late - Shaun had bought some fairy lights to put out on the awning and windbreak so we stayed up until they came on! 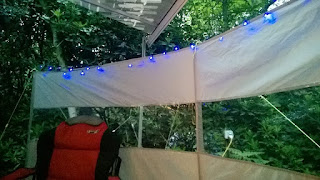 On Sunday we woke up to a beautiful blue sky - shame we had to pack up and go home.   We didn't rush - had breakfast, packed up slowly and left at about 11.30am.

We will back to Graffham - I think this is our new favourite.  The facilities appear to be a bit dated but the showers are hot and clean;  and next time I bring the bike I'll set my gps up properly so I don't get lost!