Juneathon Week2 - including lots of slacking and a 40 mile bike ride in the rain!

8th June - nice walk with Archie to our new road to nowhere and through some stinging nettles.  11,763 steps (which was brilliant considering I'd only done about 4,000 when I finished work).  New cycling top arrived ready for Sunday's bike ride. 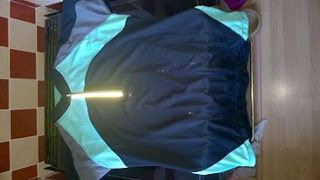 9th June - Been a proper slacker today - was supposed to go to spin class this evening but haven't been feeling well all day.  Decided to cancel, don't want to push it too much and not be well for Sunday. 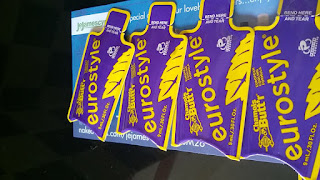 12th June - Davina Big Sussex Bike Ride - was supposed to do the 68 mile but because of the weather forecast dropped down to the 40 mile.   I agreed with hubby on Saturday night that we would see what the weather was like when we got up on Sunday morning - if it was lashing with rain we'd go back to bed but if it wasn't we go for the ride.  I met up with Nik and Conrad and we started off together (but they left me for dust whilst I was trying to work out why Garmin wasn't recording).  The ride is set off with a chat from Davina McCall, who then rides the route when everyone's been set off.
It was ok to start with but it wasn't long before the rain started to fall.  I'd managed to borrow a waterproof jacket but didn't put it on until we left the feed station when I got cold.   It was ok all the time we were moving. The worst rain I've decided is the wind driven stuff, it's hard to cycle when you've got your eyes half closed.    As last year it was a lovely route, not as hilly as I remember but still challenging.

Quite pleased with my time this year, I'm still getting used to my new Garmin and managed to lose 2 miles somewhere. 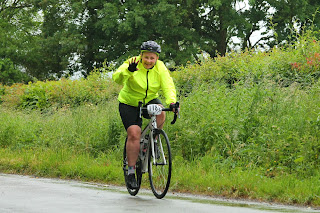 Nice medal which is given to you on the finish line 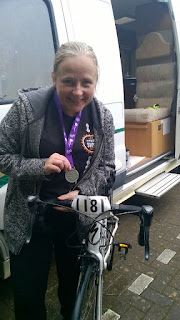 Time on the Garmin is 3 hours 3 mins, which is way better than last year, and the official time is 3 minutes faster than last year's which takes into account stopping at the feed station and breakson the road!  At the end I was handed a lovely goody bag - banana, Mars bar and a bottle of fruit water and was told to head to the BBQ where I could have lunch.  Nice choice of BBQ burger, sausage, veggie burger or a chicken kebab - I went for a sausage in a bun 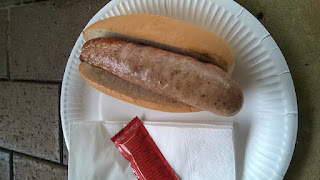 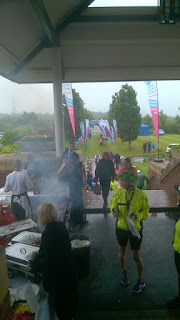 Now deciding which event to do next - need some time to do some more training but the September (11th) London to Brighton is looking favourable, or a repeat of the Chestnut, which is a week later.


13th June - Boxercise - cycle to and from - Steps 13,455.  Spent the whole of Monday night being very ill.  Not sure what to put it down to.   But it really knocked me for six.    No Kettlebells and Boxercise on Tuesday and no return to Spin.