2013 finishes as it started - with me being injured and unable to run.  Fortunately I am able to do some stuff, like sit on a static gym bike or my road bike on the turbo trainer, unlike January where I only got through the first few days of Janathon and then re-pulled a muscle in my back.  I can also swim, use the X trainer and do practically any exercise that does not activate my calves.

Race wise I started the year with a half marathon 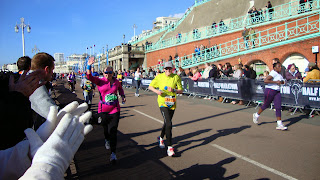 setting a 10k pb in May, and finished in July with an extremely slow (but not quite personal worst) 10k. 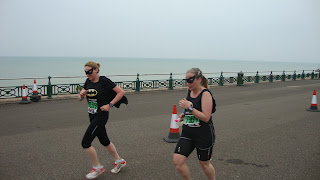 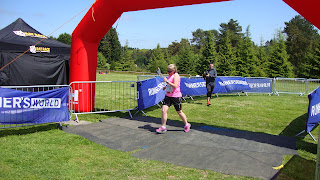 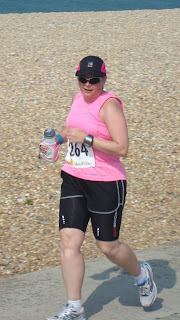 And of course, there was the Color Run - the happiest 5k on the planet.  I've not laughed so much in ages - Color Run should be on prescription, a must do for everyone! 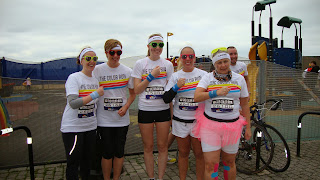 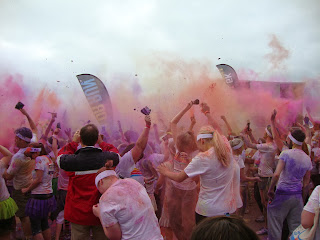 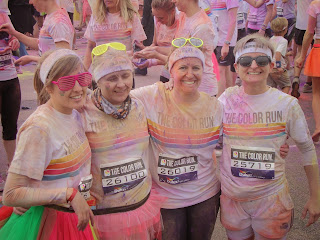 I haven't booked anything for 2014 yet - although it does look like I will be taking part in Heroes Run again in May (only 5k this time).   I am registered for Brighton Half but there's no way I'm going to be running that!  Fingers crossed that I can run soon and experience the feelings I had in May.   Cheering, supporting and volunteering at races has fulfilled my need to be around runners - Brighton Marathon, L2B Ultra, RISE 8k, Brooks 10k and Portsmouth Coastal Marathon.  A chance for me to do what I do best - make a lot of noise.   I did try it when I supported Shaun at a cycling sportive this year - cyclists are an ungrateful bunch!

I've been very lucky during 2013 to meet (and run with) some amazing people who I hope I can now call friends - too many to list individually but you will all know who you are.  Thank you for your friendship, love and support this year.

Apparently I'm taking part in the cycling London 2 Brighton in June - that's if I ever get to use my new Dawes road bike on the road.  Don't think training totally on a turbo trainer will prepare me for the undulations of the route south!  Shaun also wants me to take part in sportives with him - although we will have to find a few very short ones!

2013 came with confirmation of mother in laws Alzheimers and my own fight with SAD.  Hopefully the latter will be helped this year by a new lamp bought for me by my parents for Christmas and the advice I picked up at the Winter Blues seminar I attended.   We've also had to cope later in the year with the sudden and unexpected death of a close friend which has prompted us in to making Wills - the packs are here they just need to be filled in!   Something we must do very soon.

2014 is going to be a massive year for us - Shaun and I celebrate our Silver Wedding Anniversary (25 years) on 1st July and Danni reaches the grand old age of 18 in April.   In February she's off on her trip to Lapland with Senior Section.   She's going to have an amazing time and there are lots of activities she's going to be doing, including igloo building and dog sledging.  They're also staying at the Ice Hotel for 1 night. 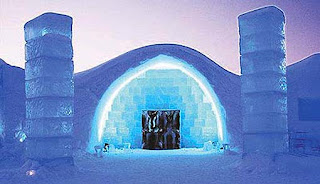 Unfortunately it seems she's going to be out of range for communication so I'll have to put up with random updates on their Facebook page to find out what they've been up to.

It's also my parents 50th wedding anniversary - looks like 2014 will be party year.

Shaun and I have quite a lot planned too - we're going back to Roubaix to watch the Hell of the North and in May we're off to Belfast to watch the start of the Giro d'Italia.   In July, to celebrate our wedding anniversary, we're off to York to watch the first few stages of the Tour de France.   Hopefully we'll be able to watch the Tour of Britian too.

So here's to 2014 - Janathon starts on 1st January and my first gym session of the year is on Friday.

Happy New Year one and all x