In preparation for riding the 68 mile Davina Big Sussex ride on 12th June I've been increasing my mileage over the last two weeks.

Last weekend I headed from home to Shoreham Harbour along the cycle path and then back again a round trip of about 32 miles, pushing through to Seaford after a quick stop off at home to replenish the drinking bottle and give my legs a rest.  Mr B was supposed to be coming out with me but had just done 3 late night shifts and didn't have the energy so I pushed on to do the last 10 miles to make up the mileage to 42.  Not a particularly hard ride apart from dodging people, dogs and children on the cyclepaths and the London to Brighton Mini Rally at Madeira Drive. 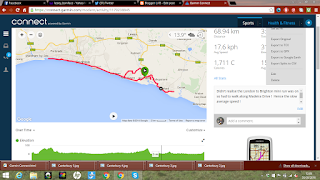 This weekend I increased my mileage to 54.  Should have been 55 but I missed it by a few yards!  This weekend's solo ride was to Worthing and back, then add the extra 10 by doing the Seaford and back ride!  Mostly cycle or shared path with a little bit of road cycling and a couple of inclines!  Lots of testing the brakes to avoid colliding with young children, dogs & people who don't understand the concept of shared paths and cycling designated areas! 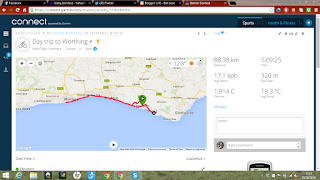 I wasn't feeling too bad until I was coming back from Seaford, everything was starting to hurt, the worst being my backside, and the mental demons were starting too.  All the doubts about doing another 13 miles on top, being out on the bike for probably more than 6 hours!   It's very true that all long distance exercise is more mental than physical.   I never thought I'd go further than 40 miles so I just need to convince myself.  I think the thing that scares me the most is the lack of hill training, if Shaun had been around yesterday it probably would've been a proper circular ride with some hills thrown in, but I just had to go with what didn't knock my confidence too much!  Better to get the mileage in than not going at all

I've been playing with nutrition - Power Bar protein cereal bars are great and easy to eat on the move.  I'm not too keen on gels, they tend to play havoc with my digestive system as they have overnight and this morning so I think I'll have to rethink the food side of things.  I'll also need to carry spare drinks tabs to refill the bottles.

No cycling next weekend as we're away in Tribby.  I've got a double class of Kettlebells and Boxercise on Tuesday but hopefully I'll be able to get a few miles on the bike on Wednesday, and hopefully some the following week in the run up to Davina.  It may still come down to the weather - I'm not riding 68 miles in the piddling rain!

The good thing about yesterday's ride - I've topped up my Vitamin D well and truly and am now sporting some very tanned legs, arms and face*