I last took part in the Cycling Weekly South  Downs Spring Sportive in 2014, so knew what to expect.   The last time I took part was in aid of my charity for the year but this time was just for "fun" and a training ride for the next challenge I've set myself.   34 miles of "rolling" "undulating" Sussex hills.  I'd actually had nightmares about two of the hills which I'd walked up in 2014, I have no idea why because they didn't seem that daunting when faced with them this time - just another set of hills!

It was perfect riding weather on 15th May - not too hot, not too cold, a bit of sunshine, some cloud and a bit of a breeze.  We were supposed to meet up with Nik and her husband Conrad who were also riding and would have been there at the same time if Shaun hadn't suddenly realised at the entrance to the racecourse that he'd forgotten his cycling shoes!   So back home (we're in Tribby so that was never going to be very quick), pick up the shoes and drive back, register, spot Baylo at the start line and wave her off, back to the van to change and off we went.   It was quite busy at our start time and everyone in our group soon sped off and left us to it, only to be joined a few minutes later by the next group.   First major hill came soon after we left the start - one very kind cyclist checked to make sure that the heavy breathing, granny gear numpty (me!) was ok and not about to go into full cardiac arrest.   My new method of getting up the worst hills is to really take in some deep controlled breaths down into my stomach (theoretically obviously cos that ain't scientifically possible) and then push them out loudly - like the weightlifters do.  It's something I've started doing at boxercise too, it's amazing how much energy that hard breath out can produce!

Shaun came and went - checking on my progress, shouting encouragement and then whizzing off into the distance and then suddenly realising I wasn't keeping up.  I've decided we both need to acknowledge I'm never going to be Miss Speedy Pants.

We reached the feed station at 20 miles in less than 2 hours so it was going ok - Nik and Conrad were leaving just as we'd arrived so we'd done ok - or so I thought!   Quick freshen up and grab some goodies from the table and we were on our way again - on to the next hill I'd been dreading.  I'm not sure it was anywhere near as bad as last time, in fact I can't even remember which one it was I walked up.   We were doing really well as we entered Plumpton Green and then disaster struck - the railway crossing barriers came down!  These are now automated so are down for what seemed like an eternity.  Lots of joking between those of us caught by it that we should do a Paris-Roubaix and just go through - joking!  Absolutely no way is bettering my time worth risking my life.  It gave me an opportunity to catch my breath, take a drink and relax a bit and enjoy the last bit back to the finish line.

We collected our lovely medals 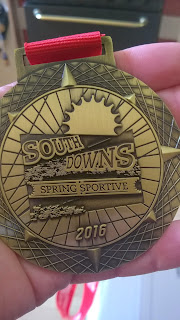 and headed into the relaxation area to meet up with Nik & Conrad who had obviously finished quite a bit before us - thanks to the train!  It was good to see Nik - her first sportive and she totally smashed it - she's far better than she thinks she is. 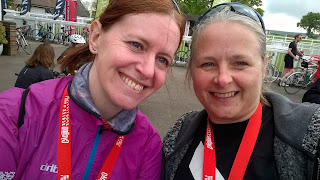 Quick coffee and a fried egg roll and chat with Nik before we headed home.

Having downloaded the data from my new Garmin I improved my time by about 5 minutes, although the official time says I was slower.   I need to get my head round it - major victories in the fact that I didn't walk up any of the hills this time.  My average moving speed was faster, in 2014 it was 39.6kph and this year it was 42.2kph - not a massive difference but it does at least mean I'm getting better at going downhill, and I spent a lot of time cycling alone with no instruction or encouragement from his lordship.

This is a great starter event for new cyclists, and old hands.  Great starting venue, lovely marshalls out on the road making sure you're safe, amazing selection at feed stations and a great atmosphere back at the finish - well done Cycling Weekly.

Onward and upward - next stop Davina Big Sussex Bike ride - and it is big - all 68 miles of it and LOTS of hills (with Nik).   I've got to up my distance this weekend to around 45 miles and push out of my comfort zone, hopefully with my trusty coach by my side.  The following week (which is a Bank Holiday) I've got to go even further but by myself - that's going to be hard, otherwise I'll be dropping back to do the 40 mile ride, on my own!