Still Hanging On In There !


It's been a busy old weekend - the kind you like at the time, cos you're constantly on the go, but then hate Monday morning because the weekend went way too quickly and you didn't get time to relax, or do any jobs around the house.

On Saturday we got up earlyish to get into Brighton to pick my new road bike up from Evans.   When I say new road bike, I actually mean the replacement bike for the second hand mountain bike I've been using.   Shaun wanted me to get a road bike so that (a) I could keep up with him and (b) once I'm confirmed fit enough I can actually get out on a bike and next year we can ride Sportives together.   There is also another reason for getting a bike, I need to shed the 2 stone I've put on over this year and he thinks this is going to be the best way to achieve it - we shall see!

This is my new bike 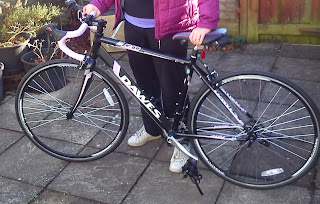 Isn't she lovely?  I didn't really want a girly bike, I was quite happy to have something in blue or black, but this has lovely pink tapes and pink flashes on the paintwork.   Now we're hunting high and low to find kit to match so that I look the part.   Good job Christmas is coming up - although Shaun has bought me the bike as my Christmas present, but it looks like the rest of the family will be buying cycling kit too!

On Sunday I was supposed to be running Brooks Brighton 10k.   This is one of my favourite local races which I ran last year.  Unfortunately I'm still not running (yes I know - it's taking aaaages!)  What's the next best thing to running a race - yes that's right marshalling (or as I like to call it runners payback).   I've already missed the RISE Undercliff this year thanks to the stupid shinsplints, and marshalled at that in October, which I thoroughly enjoyed.   They're a great charity and it was nice to see how things come together on race day.

Anyway, I digress.   Sunday was an extremely early day - I had arranged to meet Nik, Michelle & Sam at 7.30 for a coffee before heading down to the volunteer briefing on the seafront at 8.  Having been given our duty for the day we were handed a token to get a bacon butty and a hot drink from one of the little cafes under the arches.  We sat around for a bit chatting and eating and then headed down to the car park area with our "supervisor".   I had hoped we'd be up in the action of the start line so we could see friends beforehand, but no we were in charge of car parking (which was actually the best deal of the day as you'll see in a minute)! 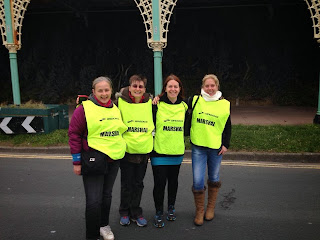 After we'd spent an hour sorting out the car parking our next job was to stand on the running course making sure the runners stayed on the right hand side of the road ready for their return back up to Hove!   It was amazing standing there, shouting at them to keep over and clapping and cheering on our Bosh buddies and other friends who were running.   The scary bit was when they all started coming back the other way - with runners on either side of us.   It was a great atmosphere though and we got lots of thank you's.

Once the last runner had gone through on the return we made our way back to the finish line where we were due to help out in the baggage drop.   As we were walking back we heard that the first runners had finished - I couldn't even run 5k in 30 minutes so the fast finish times were amazing!   The bag drop was a bit chaotic - the bags were in some kind of number order but it was hard work trying to find them.  Lots of our Bosh runners came over to find us and it was great to hear so many had got PBs.   That's the one thing I love about Brighton 10k - plenty of opportunity to PB.

After baggage we then helped out with the clear up and litter pick - crikey runners are a messy wasteful bunch - lots of banana skins and undrunk water bottles!   It wasn't long before it was time to head to the presentation at a local Hotel and then lunch.

It was a wonderful way to spend a Sunday (apart obviously at home with Shaun and Archie), we had such a laugh - I can't wait to do it again.

I've been to physio today and progress is apparently good.   Still in a bit of pain on the shins but apparently this is because my soleus is still a bit short. 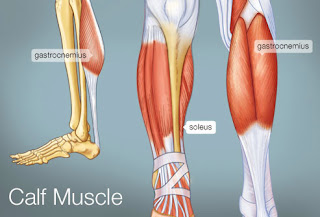 3 weeks Cathy (who has now taken over my treatment for now) gave me lots of calf stretching to do.   The gastroc stretch is going well and the muscle is much less tight but I still have some work to do on my soleus before she'll let me run!  I've had acupuncture - something I've always wanted to try but was sceptical it worked.  I can report it is the most amazing treatment in the world (that I have experienced so far).   In my opinion it beats any painkilling drug I've ever had to take.  Cathy also suggested orthotics to assist my appallingly flat feet.  That has made a fantastic difference, although I'm only wearing one pair of shoes (actually my clod hoppy Adidas trainers).  I now have practically no pain in my feet or heel which also helps with the pressure on the calves and the shins!

As well as the calf stretches I've got a list of glute exercises too - apparently I have no muscle in my backside!  I am now allowed to cycle - just for 5 minutes at a time and then stretch building up to 20 minutes and then in 2 weeks time I'm allowed to go on the cross trainer (same as the bike).  I'm also to carry on with the swimming, which is lucky as I have a groupon deal to use at LA Fitness for the next 5 weeks.  I am over the moon at the news that I can start exercising, not only for assisting weightloss, but because I'm going slightly nuts only swimming!   Cathy did say today she reckons another month of rest and stretching and I will be able to run - WOOHOO