What We've Been Up to since Tunisa!

I thought I'd share what we've been up to since our return from holiday.   It's certainly been a fun packed couple of weeks.

First some brilliant news.   Shaun went to see his consultant about what was happening concerning the leg op.  We already knew that they didn't really want to operate this year but he wanted to speak to the main man.   In view of the fact that he's lost over a stone and is building up the leg muscles with cycling the consultant is happy to leave him as he is until he finds he's in a lot of pain.  So that's great news - the consultant more or less said "see you in 10 years"!

On 11th August Shaun took part in the Wiggle Haywards Heath Howler Sportive.   We had a ridiculously early start that Sunday morning as I'd offered to be "bag lady" and chief supporter - it was only fair, he's spent the last 6 or 7 years following me round running events & doing the honours!   So off we drove at 7 o'clock in the pouring rain to Ardingly College where the event start was.   When we got the other side of the South Downs the rain stopped and the roads were completely dry which Shaun was pleased about.

Ardingly College is a lovely venue. 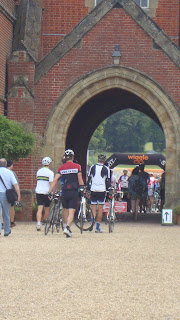 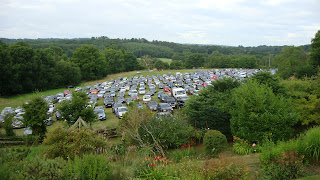 There was a massive car park and everything is well sign posted to the start line and registration.   It was very calm considering there were 950 riders taking part, there were three different ride lengths and everyone had certain times to set off.   Much calmer than any running event I've ever been to! 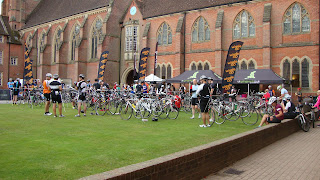 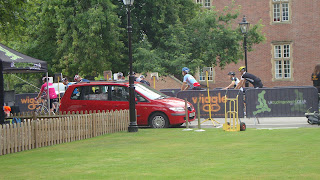 Once he'd registered Shaun got himself and the bike organised for the 'short' 40 mile ride he'd signed up for and headed to the start and that was the last I saw of him for 2 hours 33 minutes. 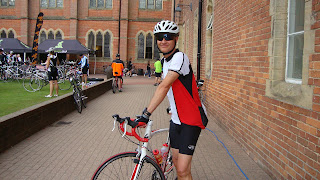 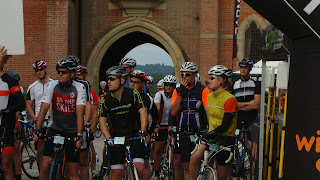 I was hoping to find some WAGS hanging around, but that doesn't seem to happen at cycling sportives so I had to put up with reading my Kindle and drinking tea supplied at the refreshment tent.  There was also a lovely array of homebaked cakes but I didn't feel I could as I was only sitting down, although I did go for an occasional wander to alleviate the boredom!

About 2 hours after he'd left I decided to walk up the road where they would be pulling in for the finish, it took me about 15 mins to walk up to the junction and another 15 minutes to walk back, during which time Shaun passed me with a massive grin on his face!   He'd caught me out again and I wouldn't get a photo of him crossing the finishing line, just a smug look when I caught up with him! 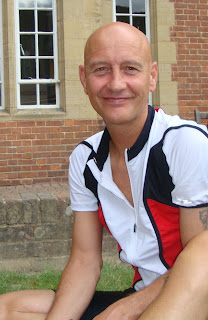 One thing I did note (and I won't do it again) sportive participants don't appreciate any loud support - I clapped those who came in before Shaun and said well done but not one single "thank you", nod of the head, thumbs up - zilch.   Next time I'll either stay at home or stay in the car!

It was a good morning and Shaun actually made it back in time to be given a gold award - which is pretty good - apparently!

A couple of days later Danni flew off to Bulgaria for a week's holiday with her boyfriend, Sam, and his family.  She had a lovely time and I'm glad she's back.

In the meantime she's had her AS results - not brilliant but she did pass.   We are currently looking at her options and it looks like she's going to start afresh in a new College and see what she comes out with.  There's not much point in looking for a job, there still aren't many around and she has no idea what she wants to do.

Shaun and I spent Saturday and Sunday in Somerset 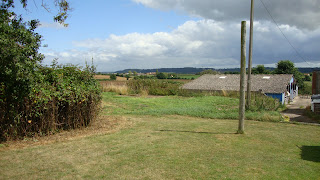 saying farewell to our Australian friends who are returning to Australia after 4 years of trying to make a go of a life in the UK.  Saying goodbye was one of the hardest things we've ever done.   Lou and Andy are a great couple with lovely girls and we will miss our annual August Bank Holiday visit to Holly Cottage.

We had a lovely meal at The Sanctuary in Taunton on Saturday night with some of their friends.  It's not really the sort of place we'd normally go to but it was nice to treat ourselves.

There was a lot of wine consumed that night and Sunday was a lazy affair, apart from Shaun and Andy going out for a hangover bike ride 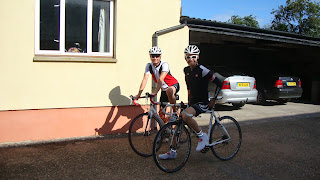 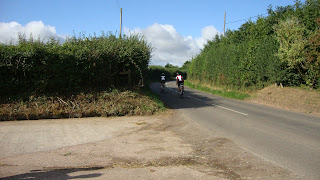 and Lou and I taking Holly for a walk with everyone else that was staying at the cottage. 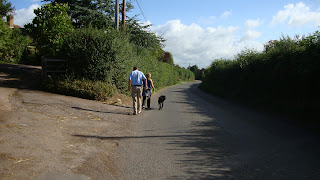 I had thought of taking my running shoes for a Sunday run, but there are no footpaths for a mile in either direction and Shaun assessed the road to be too busy to run along!   I must admit they are a bit hairy so I'm glad he stopped me!    We had a lovely lazy lunch, which started in the garden until the heavens opened and then ended in the dining room 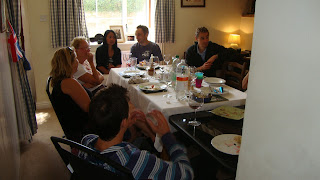 and then our final farewells - our next group photo will be in Melbourne unless they come back for a visit in the next 18 months.  We're really going to miss them! 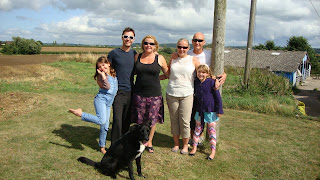 The next event is the Color Run at Brighton - our packs have already arrived so all we need to do now is get out and do some training !  Shaun and I are off to watch the penultimate leg of the Tour of Britain which again finishes in Guildford.