Lots of News & A Couple of PBs

Picking up from my last blog Shaun is now back at work having had 3 weeks off.  The early appointment with the consultant confirmed our worse fears - they hadn't removed cartilage or mended tendons, they'd actually removed a large piece of bone which had been damaged, and flushed out the joint.   The only option left now is for a whole knee replacement but because of the previous work done on the thigh bone, that will need replacing with a titanium rod as well.  A major op with some major recovery time afterwards.  So he's back to work in the meantime, struggling to walk much further than a couple of miles.  He has however set himself up for road cycling which he has been trying to get going for years.  He's bought a 2nd hand Carrera road bike, some cheap kit from Aldi, some shoes & cleats and is gradually building up the miles with a view to completing the London to Brighton Ride in June before he goes in for the op.  Apparently building up the muscle will help with controlling pain in the knee joint and obviously keeping his weight down will help too.   He's not happy about not being able to walk long distances with the dog, but hopefully getting out on the bike will be a good substitute.  He's already had his fair share of dickhead behaviour - being spat at, barrages of verbal abuse and had a McDonald's burger thrown at him.

On to more cheery news - on 10th November I went to Eastbourne for my 2nd Park Run.  It wasn't great weather, but not as bad as the previous two weeks and the course was extremely muddy.  I'd decided to wear my ASICS, I've fallen out of love with them now that I have my Sauconys so not too upset to get them muddy and soaking wet.  It was a great run and I managed a PB at 34 mins 22 secs.  There were only 57 people running - and I came in at 55th!

I've now started my Half Marathon plan - it's only a 12 week plan but I've added 3 weeks on to give myself some leeway.  It hasn't started well, and in the run up to Christmas I have a few weekends which throw it out completely, the Running Show next weekend, a visit to Essex for a boozy weekend catch up with Paula & Dave, and a 5k Santa Run when I should be doing 9 miles.   I need to tweak it slightly and I'm also hoping that Paula still has her dreadmill which I can jump on Sunday morning (hangover willing).

One race which fitted very well into my Half Mara training plan was the annual Brooks Brighton 10k.  I ran this for the first time last year, and set my 10k PB at 1hr 9 mins 45 secs.   I haven't done much running in the last couple of weeks, lots of reasons/excuses so wasn't expecting much out of today.  It was a lovely sunny, dry day, and I set out for the first time in my running life alone - no support, no cheerleaders, no bagman and no fellow runners.   Lots of Twitter support though and memories from previous races!    After the usual queue for the loo, and dropping off my bag I walked up and down a bit to keep warm and then headed to the start.  Needn't have worried about being alone on the start line - lots of friendly people to chat to.   It's a strange route - head east from the pier to the Marina and then turn back to the pier & wheel and continue to the King Alfred (6.5k) and then run back to the start/finish line.  Quite a bit of argey bargey at the back of the field with fast runners starting at the back and trying to barge their way through the field!   The wheels kind of fell off between 8 & 9k but having given myself a good talking to and plugging my music into some fast tracks I reached the finish and managed a really good sprint finish (not sure where that came from) when I saw the time on my Garmin, I desperately didn't want to be outside my 10k time.  Another runner was bearing down on me so I somehow picked it up and tried to beat her - to no avail but I did manage to cross the line with my Garmin stopped at 1 hr 9 mins dead!   I collected my medal and bottle of water, went to get my bag & turned my phone on.  The message came over that my chip time was 1 hr 8 mins 58 secs!  Shame there wasn't someone there to share it with - but that came back to bite me on the arse a couple of hours later.   Having updated my status on Twitter and Facebook my Mum & Dad phoned me at home to "give me a gentle bollocking" for not telling them I was doing it alone - bollocking accepted, it won't happen again! 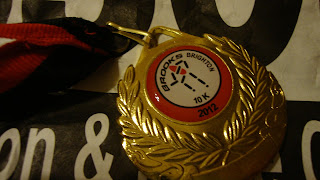 Next stop Santa Run 5k on 9th December and full throttle to Brighton Half Mara in February!