Today I ran the annual RISE 8k Undercliff Run.   It's the third time I've run this event which is a women only event organised by a Brighton charity called Rise.  The last two I've run alone, apart from between 100 and 150 ladies of all abilities, but this year there were over 200 running, and people had come from far and wide including my friend Alma who I have run with before, and supported at races.  It was great to run with her again, the last time being the Spring Tempest 10 miler!  And, of course, my support team were there too although a little depleted by two and a bit members - Steve & Jo were marshalling at the Badger Half Marathon and Archie had been left at home because he gets a bit over-excited at running events.

Hubby has had his knee op, and whilst he "only" had damaged cartilage removed, he has been off his feet until he returns to see the surgeon next Thursday.  He was told only to return to walking when he felt ready - so I've been getting up at 5.30am to do the morning dog walk, going to work, coming home and doing the afternoon dog walk.   He has been  able to do the cooking and some cleaning and he has been doing odd bits of dog walking but is not quite ready to return to previous distances.  He was told not to drive for at least 2 weeks and no cycling for 3 to 4 weeks.  Anybody who knows Shaun will know that sitting down is not his thang - he has already driven the car and no doubt will be back on the bike before the 3 weeks are up, in fact I'd put bets on it.

So, training has been difficult, I've been far too tired to go out running and have only managed two 5k runs in 2 weeks.  Not the best preparation for any running event, but this is me we're talking about!

The weather reports during the week have yoyo'd from sunshine to showers on an hourly basis.  Saturday was a lovely day, a bit chilly early on but the sun came out in the afternoon and I had a lovely walk to the beach with Archie.  We even tried a little dog jog, although running in walking boots is not recommended!

Today we woke to perfect running weather.  Wasn't really sure what to wear so went for running top with event techy vest over. A bit of a panic as we got to the event with 15 minutes to spare - I hate arriving that close to a start, the queue for the loo always takes ages.  So panic over and chance to stand and calm down whilst waiting for the loo.  I completely missed the Zumba warm up (shame - with my Zumba history that's no bad thing)  This year the event has really taken off and with over 200 ladies running it was a much bigger field than in previous years.  Alma and I took our position at about 3/4 from the front and started off at a nice pace. 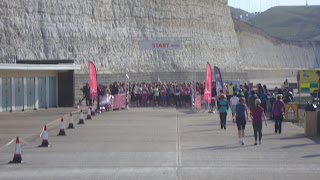 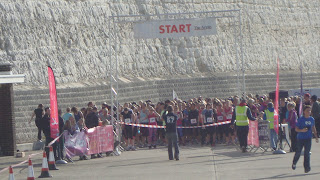 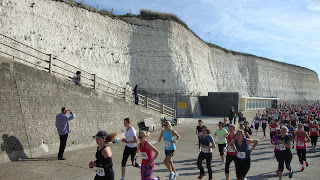 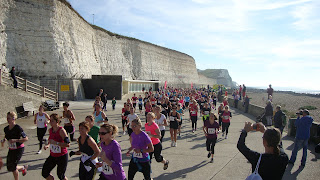 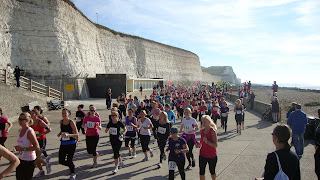 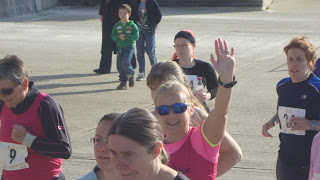 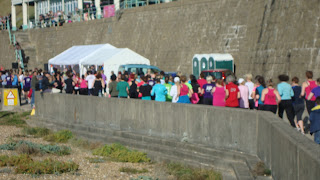 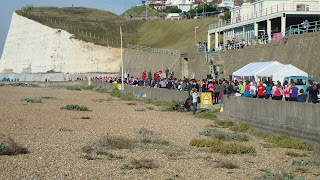 Once you hit the cliffs you lose any breeze and with the sun reflecting off the chalk it gets quite warm and I'm so glad I wore my new running sunnies.   There's always a great atmosphere and it's well supported - even members of the general public taking their Sunday constitutional clap and wish you luck, and there is always a samba band playing.   The course is a simple out and back with plenty of water stations and marshalls cheering you on at the kilometre marks and before we knew it the lead runners were coming back!  The samba band at the turnaround was a nice addition this year.   We hit 5k at 34 minutes which was OK, but had to stop somewhere soon after as I'd forgotten to use my inhaler and my breathing was a bit heavy.  A very short walk break and we were back on it.   6 and 7k seemed to go quite quickly and before we knew it we could hear the samba band playing near the finish line.  Alma said if we picked up the pace a tad we might get back before 54 mins so no idea how fast we were going but I was puffing like a steam train for the last 500m and as we crossed the line I looked at my Garmin - 55 mins 01 secs.   Not quite the 54 minutes I was hoping for but blimey with very little preparation beforehand and a knackering two weeks of early mornings I'm more than happy with that. 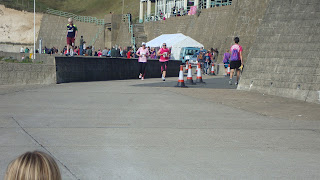 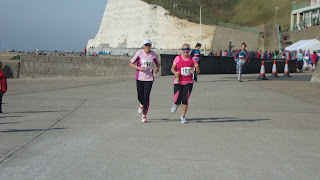 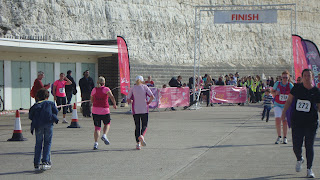 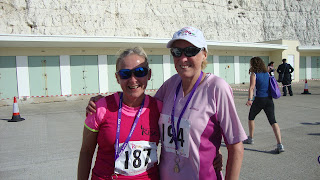 And if this amazing goody bag which also includes a banana and a bottle of water (both consumed rapidly post race!) ain't worth the entry fee then nothing is 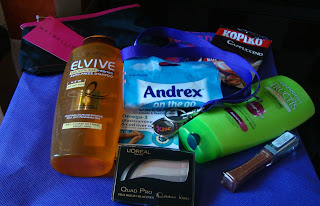 Can't wait to sign up for next year's.   Thanks to all at Rise for another fantastic event.

Training is now going to have to be full speed ahead for Brighton Half Marathon, but first I'm running the Brooks Brighton 10k, unsupported.  Shaun will be back at work, Danni doesn't want to spend an hour "hanging" in Brighton and is now at a local firework event the night before, and it's not fair to expect Ma & Pa to come down just for me.  I will be taking advantage of the bag drop and running the race just for me.

Also coming up is Ma's 70th birthday on 10th October.  We are returning to our favourite country pub on the 14th for a family meal.

In other news I have given up with Weightwatchers.   The weight has stopped coming off, and I was skipping back and forth between 63 and 64kg.   Shaun finds it easier to count calories so I'm back to Weightloss Resources. It's not going particularly well but at least I've stayed the same at 64kg for the last 3 weeks.  Here's hoping that with all the Half Marathon training this will now start to work again.  I really need to get this last stone off, I don't want to be 10 stone for the rest of my life!