It's Been a While!

Wow, can't believe it's been over a month since my last post so much has happened since the end of Juneathon that this post may be a little long!

The biggest event was my holiday to Tenerife which had been booked since January!  We haven't been to Tenerife since Dani was 6 so we were expecting a few changes but luckily the hotel complex we had booked looked the same as it did 10 years ago (not sure if that's a good or a bad thing). 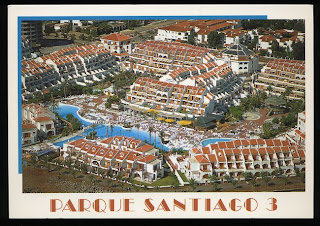 It was lovely and hot whilst we were there, between 35 and 38 degs every day with only one day when cloud refused to clear for most of the day.   I did take my running kit with me and got out for 4 runs - all done in the morning before the temperature rose above 25 degs.   I would have liked to have gone out more but late nights and alcohol consumption are not conducive with early mornings.   There are no photos of me running but I here is a photo of my running ground - the furthest point I ran to can just be seen in the far distance where the tall buildings are behind the lamp post! 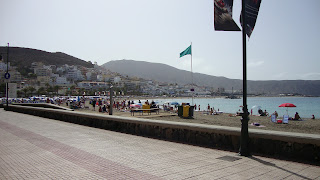 The first run was only 2 miles out and back from the Hotel as I wasn't sure how far I could go before getting lost.   It turns out that the next run with a little more confidence meant I pushed on to the end of the promenade to Los Christianos and back for a respectable 4 mile run a few days later.   That promenade was very busy at 7.30 to 8am and again between 8 and 10 pm with the running fraternity.   One thing I will say was there wasn't a lot of runner's love out there - only got 1 single hi and a wave on the last day!
Here's my Garmin entry for the second run of the holiday.
We didn't do much else on holiday apart from visiting the Jungle Park (which was renamed from Eagle Park when we were there last time).   I'm not a great lover of zoos but this one is fantastic as it has a fantastic flying display.   One by one the keepers set free a group of birds including eagles, hawks and other exotic birds.   It's great to see them flying free for a change. 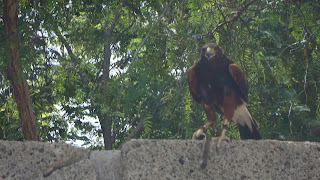 We also visited the waterpark.  I'm not a great lover of waterparks either - they're expensive, busy and I'm too much of a control freak to throw myself down a water shute for the sheer hell of it.  A bit fed up to get our tube of Jambon Pringles confiscated at the entrance (no picnic policy!)   What they didn't find further down the bag under a towel was a selection of sandwiches and some apples and tins of fizzy drinks.   It was a great day out and I did throw myself down a few rides, a couple I regretted as the next morning I was stiff as a board! This caused a problem for my 3rd run of the holiday as I could only manage 3 miles and my 4th run was shorter than I would have liked, although it was 4 miles I had hoped to extend it by a couple of miles but never mind.

All in all a great holiday - lots of sun & heat which is what I needed.

So what else has happened?  Just before I went away I entered two competitions one on Twitter for Weightwatchers and one on Facebook for Health & Fitness Magazine - which I won.   I am now the proud owner of a Davina DVD Boxset (which I've wanted to buy for ages but didn't think hubby would appreciate me adding to my ever growing exercise library) and some Weightwatchers Curry Paste Pots. 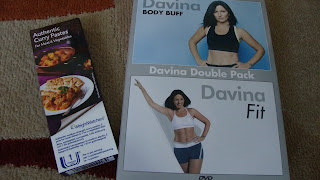 Having now completed the Cardio Buff section I realise I need to do some work on my fitness!!!  I have had great trouble walking downstairs over the last couple of days!

We also went to the Olympic Road Race on 28th July - I've been a massive fan of road cycling, especially the Tour de France, for the past 20 odd years and to see our Team GB boys in action was something I wouldn't have missed for the world.  Shaun and I travelled to Hampton Court where there was a chance to see them twice, in the morning on their way to the Box Hill Circuit and in the afternoon on their return to the Mall.    As we all know things didn't quite work out the way they should but  Shaun and I had a great day and met some wonderful people on the way.   I have to say that travelling via train was brilliant - couldn't have been better so well done to the transport network so far. 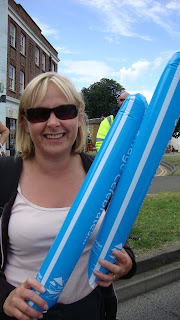 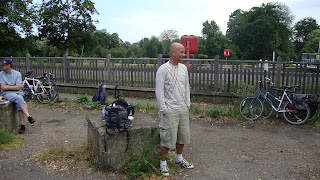 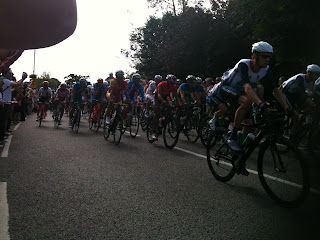 And as I'm writing this Brad Wiggins is now the Olympic Time Trial Gold Medallist - a fantastic day for us all!

Next stop is the Seaford 10k and Danni's results day a few days after.    See you soon