I have wanted to do the South Coast Run 10k for a couple of years but for one reason or another not been able to.  This is a local event which actually takes in most of my training ground.

My training has been a bit rubbish in the run up to the event but I'm not going to dwell on it - I did what I could and I'm continually reminded that no training run is rubbish!

I'd received my entry number in an email during the week and was instructed to register either on Saturday afternoon or on the day.  We were both interested in seeing how the triathlon event is set up and the dog needed walking so we killed a few birds with one stone and walked over to Seaford to spectate and register.

The Triathlon was very well organised and when we arrived at about 11 o'clock there were lots of people running and cycling with others going through transition from the various start groups. It was great to see all the different types of bike, kit and helmets on the bike section.  I managed to spot @Diminutive Runner who was taking part in the Sprint and just coming out of Transition to start her bike section. It was lovely to be able to give her a quick hug, she looked very nervous but for her first tri did very well with a 2hr finish.   Registration for the runs opened at 12 so I went straight there and didn't need to queue; a race number, bottle of Gatorade and a packet of porridge oats in a plastic drawstring Asics bag later and we were back up for some more spectating, lunch in a nearby pub & bus home.

This morning I was up early to take a cool shower and have some porridge, it was already 20 degrees!  We made our way to Seaford for the 9am start.   Only about 300 runners taking part in 5k, 10k and Half Marathon.  As the race starts on the unclosed road there were continual announcements about runners being disqualified if found to be using Ipods etc. The course was mainly flat road and promenade apart from the start which was grass and an incline onto the road and the turnaround/finish was down a gravel slope and then grass. The only drawback with this race is the fact that it's laps, one up and back for the 5k, 2 up and 2 back for the 10k and 4 up and 4 back for the HM - luckily there is lots to take your mind off the tedium, lovely views out to sea, old people on motorised scooters, families with kids on bikes/scooters/just running loose, people walking dogs, people riding bikes/running/walking slowly lots of people wandering on and off the beach and fantastic marshalls dotted along key points to keep the motivation going.  The other thing which was disappointing was the lack of support especially at the 5k turnaround (only a marshall shouting instructions), thank god for the family because I really don't think I could have completed the race without them.  They definitely won the "Best Support Team" Award at this event.
When you get to the finish line there's no-one there apart from the organisers and your own support - not many people hanging around after they've finished. We did wait to cheer in the first male and female finishers of the Half Marathon.

Pretty pleased with how it went overall, missed my PB by 1 minute finishing in 1hr 10 mins which has called for a few "what ifs" like stopping to swap drinks bottles, walking so that I could calm my breathing down at 8k, it not being as hot as it was.  I'm pretty pleased with the time, it was way too hot for a PB, today was about finishing & learning.  All in all a good day and at least at the end of a massive effort I got this :- 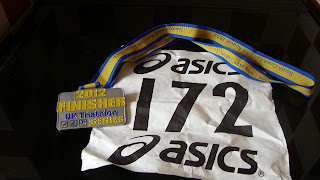 Having checked the results I came in 39th out of 45 women in the 10k event, two men came in after me, and that doesn't include all those that were registered for the 10k but stopped at 5k.

Next stop 8k Undercliff in October!
Posted by LilB at 12:02