I knew this ride wasn't going to be easy when I saw the profile on the event information, but I was assured it was nowhere near as bad as it looked.  "You'll be fine" said Shaun! 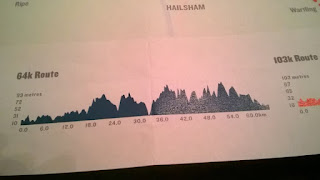 On Saturday we both suffered from a bit of an upset stomach, no idea whether it was food or a bug, and there was every possibility that the ride wouldn't happen, which would have been a massive disappointment.    Saturday night we decided we'd go and when we got to the 20m route split we'd see how we both felt. 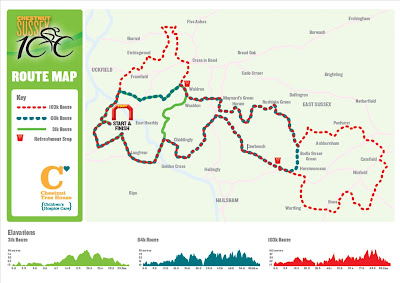 Shaun loaded up Tribby with bikes and kit and off we headed to Bentley Wildfowl where the ride was starting.  It was a bit nippy out so I decided to try out my new Aldi arm warmers.   They were very comfortable, just the right length and the strip at the top meant they stayed in place for the ride.   I also wore the ergonomic socks Shaun bought and he wore the wool ones - sounds like I should have worn the wool ones instead as my toes were a bit cold at one point.

The first stretch to the feed station at Herstmonceux seemed to take forever.   The feed station was in the village hall so nice clean loos and lots of food and hot and cold drinks if you wanted it.   We only stayed long enough to fill my water bottle, have a wee and Shaun grabbed a cup of tea.

The roads we were cycling down were great mostly, some were very potholed though and in some of the tree lined lanes it was very dark, although we did need sunglasses with the gorgeous sun being so low in the sky.   I did struggle with some of the hills, but I took my time and got up all of them but two, even the one where it was pitch black and came out at the top of the road opposite the road closure.   The road closure it turned out added an extra mile to the route.

Somewhere between 30 and 35 miles there was a really horrible hill, everyone who passed me was puffing and the minute I saw someone climb off in front of me that was it - brain told legs to stop.  Unfortunately I could see that it ramped up again so brain got the better of legs and I was off ...... walking, up hill!    Shaun was waiting for me at the top with two marshalls who directed us over a busy junction.

Only another 5 miles or so to go and another feed station which we didn't stop at, I just wanted to get finished!!!!!  I remembered from the profile that we had a few more hills to do, but they were nowhere near as bad as that big one, and the elevation was decreasing.

It was great to turn the corner and see the entrance gate to Bentley and hear the music playing.   There was lots of support as we crossed the finish line together and we were given our medals. 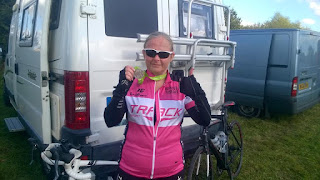 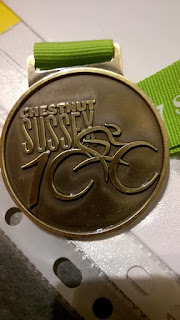 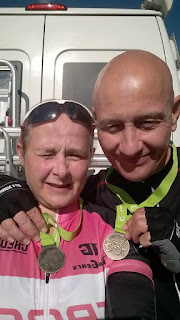 We'd done 41 miles in 4 hours 4 mins (18 mins officially if you count the stop at the feed station). We took the bikes back to Tribby and got changed, and then headed to the coffee shop where we bought some well earnt coffee and cakes. 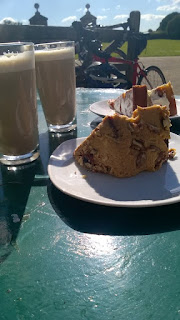 We'd definitely like to do this ride again in the future, and who knows with a bit of training beforehand perhaps we could manage the 103km (60 miles) route ..... oh and with a lot of hill training.   The support from the organisers was fantastic from beginning to end, and a lovely medal to boot.   Wish we'd gone for the free massage after too!