As many will know I started riding a road bike at the beginning of the year and I've been building up distance steadily, getting grips with going downhill without crying, uphill without having to walk and generally go a bit faster.  With the sudden death of my lovely friend Sam in January I wanted to raise funds for charity by doing a cycling sportive.  All the local ones are quite hilly but hubby thought the Cycling Weekly South Downs Spring Sportive would be a suitable one to enter - hilly but not too difficult.

As is customary in the run up to an event I had a rubbish ride during the week, I dropped my chain a couple of times, couldn't get up my nemesis hill and felt generally rubbish but knowing these things happen in running too I tried not to panic (and headed to Twitter for some reassurance).

I started getting ready for the event on Friday - piling up bottles, food, gels, cycling computers and kit.   On Saturday night Shaun came home from work and loaded up the car.   Sunday morning came very quickly - we left just after 7am as the weather forecast was hot and sunny so we needed to start early, although our official start time wasn't until 8.30 for the 34 mile ride.

Cycling registration is completely different to anything I've ever experienced at running events.   I think I've mentioned in past posts about hubby's cycling events - there doesn't seem to be the panic amongst cyclists that there is in starting pens at running events.

Having collected our timing chips (stuck to our cycling helmets), bike number, free tea token and free bottle of SIS Go or Rego token we went back to the car to set the bikes up.   At just before 8.30 we made our way to the start line where my friend Nik was waiting to see us off. 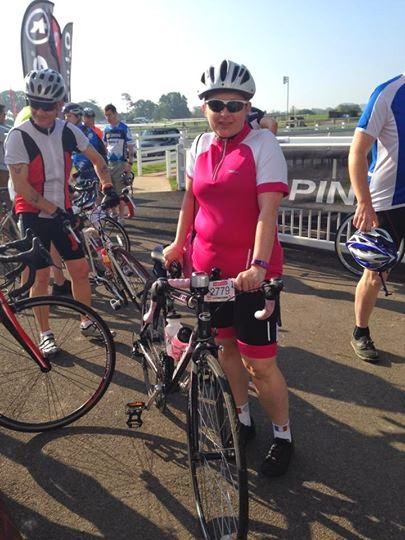 Cyclists are let out on the road in small groups having been given a safety talk by the start team.   Leaving Plumpton racecourse was horrible - the first hill came quite quickly, before my legs and lungs had really worked out what was going on and before I knew it I was off the bike and walking up - not the best start but things did improve.

The rest of the ride went well, some of the hills were a bit difficult but with "Coach Shaun" behind me shouting encouragement and technical instruction I managed to do all but two (I'll come on to the second one in a bit!)   One hill worked really well - a lovely sweeping descent that I managed to get a good speed on without touching my brakes and then all the way up the uphill to the top without dropping a gear!   I managed to scare the living daylights out of a cyclist who came alongside just at the wrong moment when I let out a really loud "wahooooo" screamy shout.  Poor bloke!   Hard to believe that 4 months ago I couldn't go downhill without crapping myself and yanking on my brakes so hard I almost came to a grinding halt.

All was going well and just after the split from the Epic and Standard course we found the feed station.  Anyone who's ever done a sportive or organised cycling event will know feed stations are something to behold.  I wish I'd taken a photo of it now - I've never seen so many jaffa cakes, fig rolls, jelly babies, flapjacks, bananas!   There's also the chance to refill bottles with water and sports drink (in this case SIS) and take a gel, and use a proper loo!   Unfortunately just after the feed station was a horrible hill, once again legs had forgotten what to do and the fig roll I'd wolfed down hadn't quite been digested.  Second walk time!    Once we got to the top that hill everything fell back into place again and we were off to do the last 13 and a bit miles (not sure why I had to break it down into Parkruns and running distances in my head - guess old habits die hard). 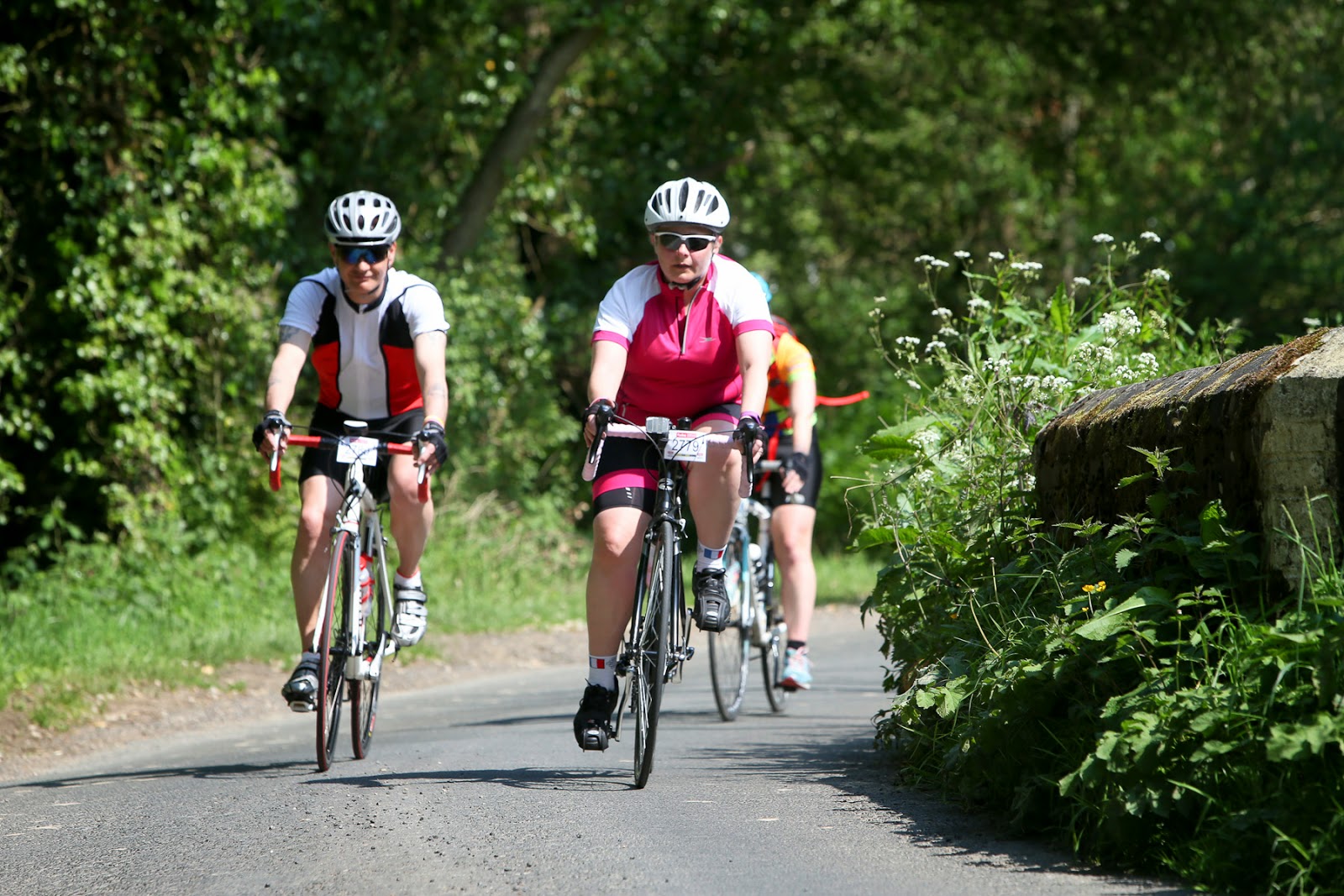 I wasn't really keeping an eye on the time it was taking us until my Garmin hit the 30 mile mark and we'd not been going 3 hours (my average speed is normally about 10mph).   A little effort and before we knew it we were making our way up to the finish line.

2 hours and 59 minutes after we'd left we crossed the line.   Have a look at the video - guess you'll work out how happy I was!  Having collected my medal, event Tshirt, magazine and free recovery shake we headed for a sit down and chat with Nik and her hubby and Twitter friend Nick (@thebandit007) who had also done the short distance in under 2 hours! 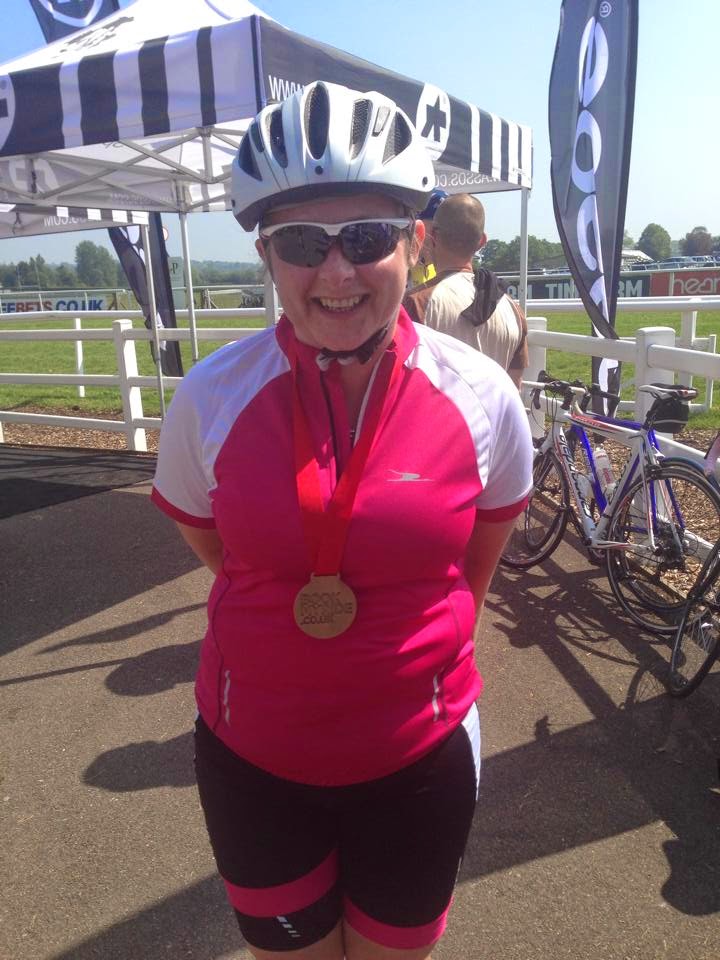 I am so pleased with how it went and I really can't wait to do another one - a nice flat one would be lovely!

Thanks to Cycling Weekly for such a brilliantly organised event, Shaun for putting up with me and being a brilliant coach and sacrificing his Gold award, Nik and Conrad for being at the start and the finish and Nick for waiting around to see us back in!!   To all my lovely Twitter followers, family and friends for your words of encouragement  and support - thank you xxxxx