My Name is Lesley and I have a fear of descending!

OR : Facing a fear and whooping it's ass !

Since my last post it's been all go on the bike front.   The session at UK Cycle Labs that Shaun bought us for Valentines Day was brilliant.  Basically sit on a bike in front of big screen, pedal like mad to keep your power line in the green whilst watching a cyclist ride a popular route for 30 minutes.   Interval training this way is the new training tool and apparently if you do it regularly enough improves your cycling in leaps and bounds.   It's not cheap but I think it's something we'll do maybe once or twice a month during the winter.   We do have our own turbo trainer which I use regularly and on the back of doing the UKCL session we have bought a DVD (climbing the Alpe d'Huez) and a cadence monitor which does basically the same thing. It definitely makes you work. 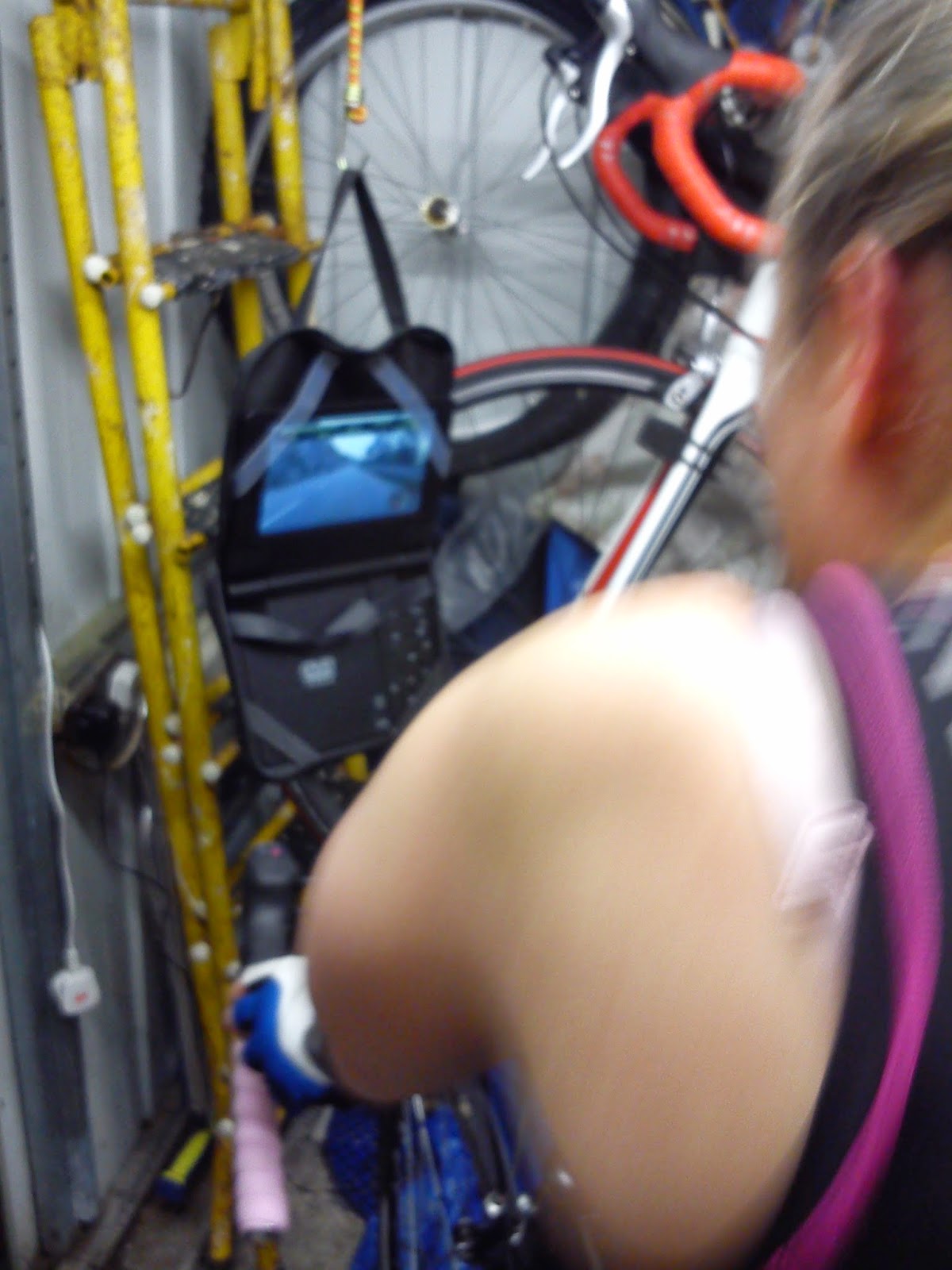 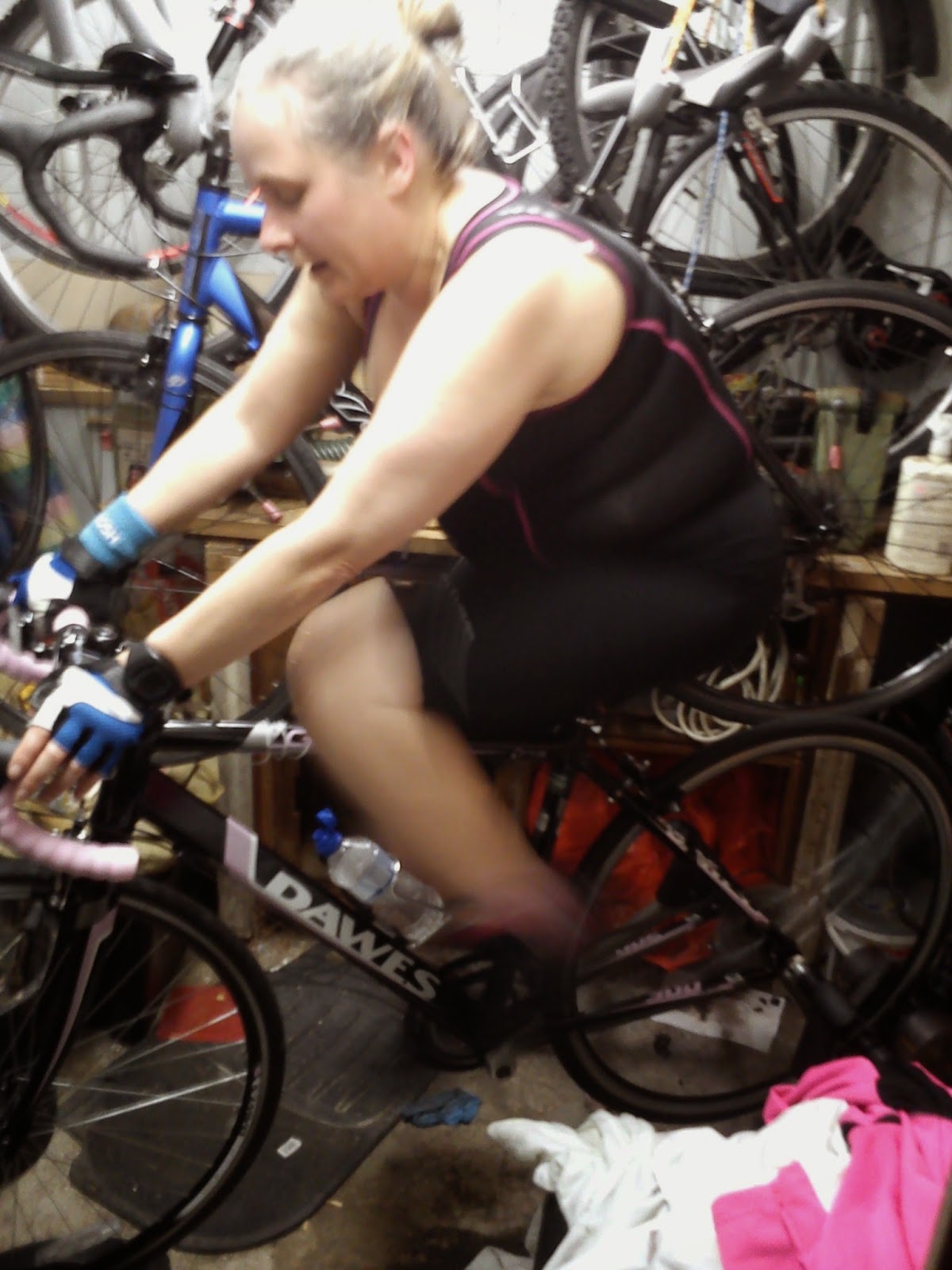 During January I only managed two bike rides out and both of those were on the flat between Brighton Marina and Shoreham harbour.  After a chat with Cathy she confirmed that I could start working the hills which at first I was really pleased about - until Shaun took me out for our first proper road ride.   In the past I've been fine cycling a mountain bike, probably something to do with the width of the handle bars and chunky tyres but it was, to me, a whole new ball game on a road bike.   Confession time - my name is Lesley and I have a fear of descending - no matter how small the undulation it's still there.  The first ride out was a very hilly 16.5 miles - not quite what Cathy had in mind, but it is difficult to find a route straight from home that isn't very hilly (or undulating as hubby likes to call it).

The next ride out Shaun organised a better route but necessitated me driving to a rendezvous point so he could add some miles and cycle there.   Meeting at Arlington Reservoir was perfect, a cheap car park, a loo and a kiosk selling cake and coffee.   Some lovely relatively quiet country roads with some gentle uphills and mostly gentle downhills.   First ride saw me grabbing for the brakes at every downhill and after 15 miles I was glad to get back to the car.   The second time we did this ride I improved a little and some of the downhills I managed to lay off the brakes and followed an instruction I had received via British Cycling I actually became a bit more confident.

I've entered the South Downs Sportive in May - a short ride of 33 miles.   Just like running, I needed to increase my mileage so Shaun found a nice addition to our 15 miler and has now got us up to 25 miles.   Now I'm driving to the car park at the Long Man of Wilmington - where there's no loo and no kiosk but it is free to park. 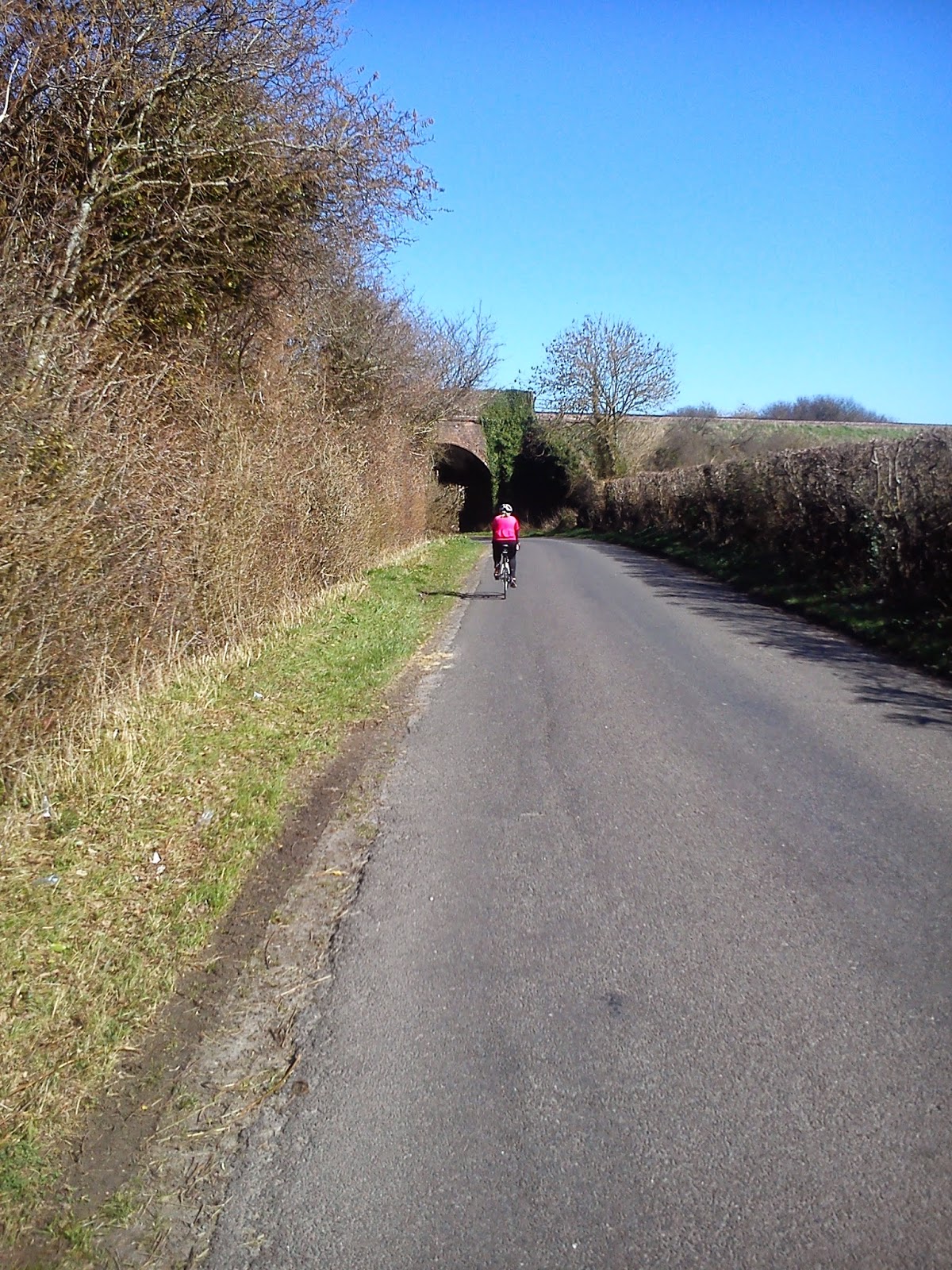 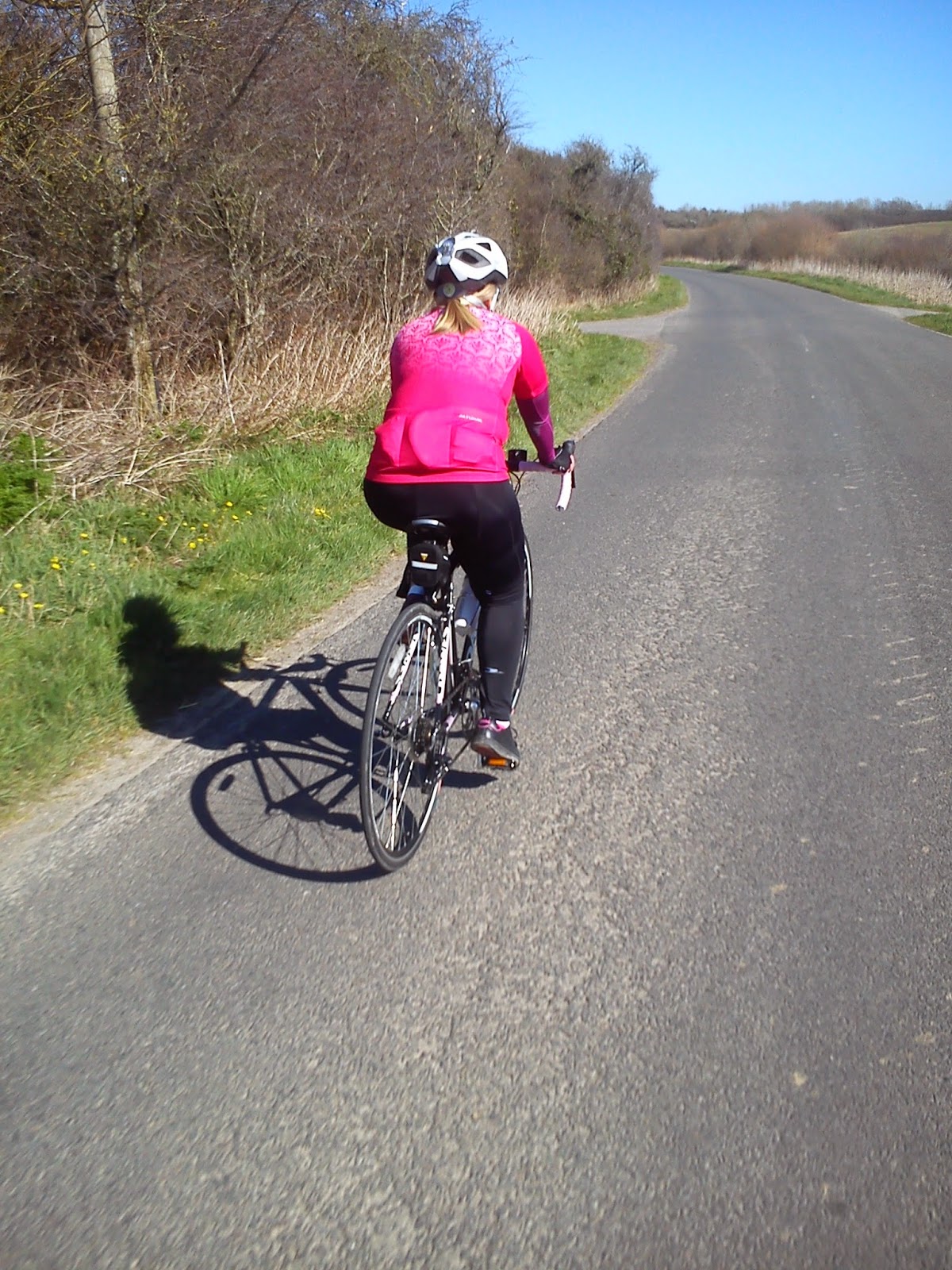 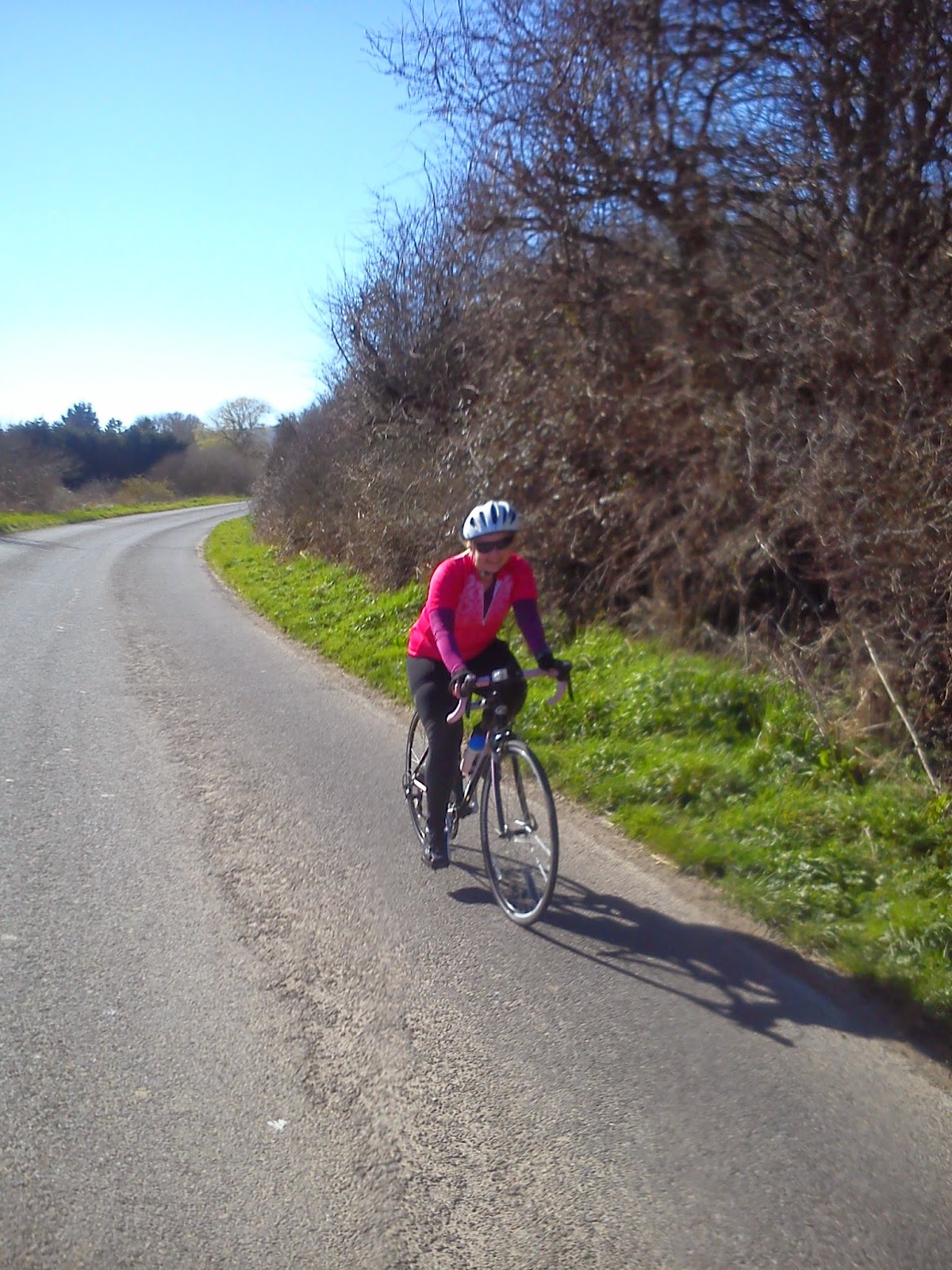 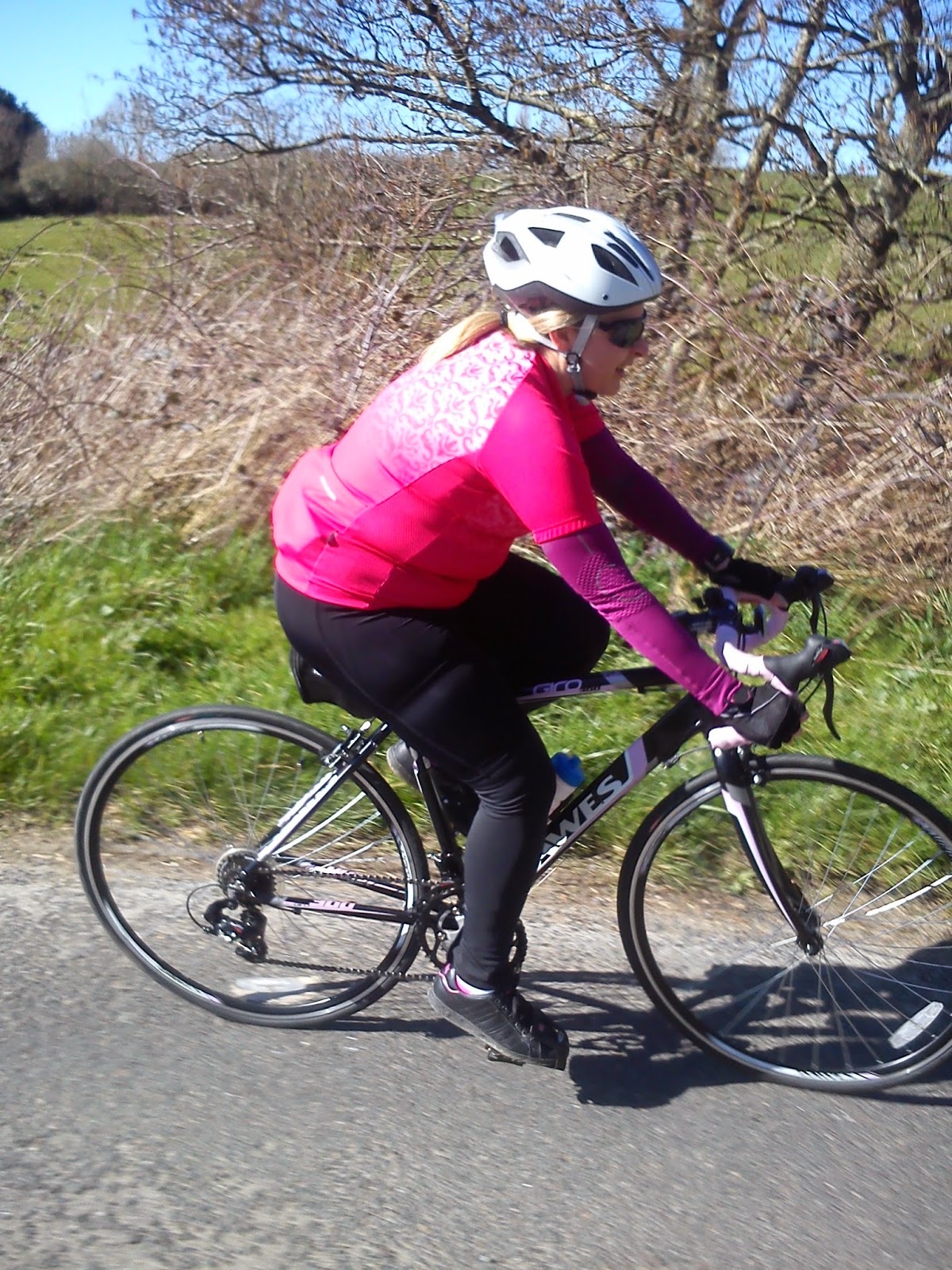 Riding up to Arlington for a quick comfort stop and then on up to Laughton and back again has added a good 10 miles and I'm absolutely loving it.   Here's a link to my Strava account.   Unfortunately last Sunday's ride was cut short to 21 miles as it hailed and rained.   The ride was also tied in with Sport Relief - I donated £5 to Virtual Runner UK to be part of a virtual Sport Relief and received a lovely medal for my effort.  It was great to feel that I was part of something other than just another ride.
I think I've surprised myself - Shaun finds it amusing that I can go faster on the flat than I can going downhill, but I'm getting there.   I think with the extra weight I'm carrying I will struggle with the hills for a while, but I can pedal on the flat and on the turbo for ages.   Last Sunday's ride included some "wahoos" on a couple of downhills, and I managed to get a little way up a hill that I walked up the previous week.

Shaun's taking part in the Surrey Cyclone tomorrow, so I've taken a back seat  (well it is Mothering Sunday) and doing the supporting thing instead.   I've already had my present from Dani
Fingers crossed for some good weather between now and May so we can get out during the weekday evenings!