Our Baby has Flown the Nest & A Tribby Trip

During our recent road trip there were frantic phone calls from Danni who had viewed a flat with her boyfriend.  By the time we'd got home they were signed up and ready to move in as soon as they got back from the Gran Canarian holiday on 20th September.  While they were away I gradually started to pack her stuff up.  When they got back from their holiday they began moving into the flat - a week later they're pretty much settled in, just a few items left to go like a fridge freezer and a washing machine.  In the meantime all the washing is coming home - luckily they're only 10 minutes walk away.  Oh, and they have no internet at the moment so anything web based has to be done at ours too.

It doesn't feel like she's moved out yet, guess that will come when she's only coming back to visit.  The nice thing is that now she's in the flat I don't have to lay awake at night waiting for her to come home, or for a phone call to say she's staying at the boyfriend's.   Obviously we do worry about how they're going to afford it, but they've been doing their sums for what seems like ages so we just have to sit back and hope it all goes ok.   She's back to Uni now for the 2nd year of her Psychology/Criminology degree.

Last weekend Shaun and I headed to the West Midlands for the Cycle Show at the NEC.   We dropped Archie at my parents for the weekend and drove to Halesowen where we'd booked a pitch at the Caravan & Camping Club Site Clent Hills.   A lovely site not far from the M5 surrounded by countryside.  It was very peaceful.   On Saturday morning we drove to the NEC for the cycle show.  No problem parking Tribby in the general car park - I had emailed them to check beforehand!  The car park staff directed us to a special area so we had plenty of space around us.

The bike show was pretty much as expected - a LOT of lovely bikes to drool over, some lovely kit and some non-bike related stuff.  We also got the chance to see the Boardman bikes used by the Brownlee brothers and Chris Boardman's hour record bike from the 90's 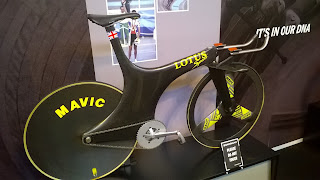 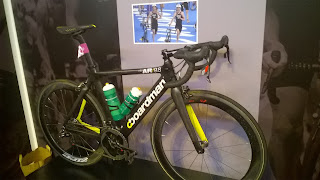 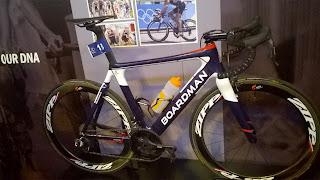 We were a bit disappointed that there were no freebies - at the London show a couple of years ago we had loads of trial cleaners, lubes and other stuff.    It was also disappointing that all the cycling heroes were at the show on the Friday, but we later found out that it was Trott /Kenny wedding on the Saturday so may be why!

Shaun signed me up for a bike breakdown insurance - 3 recoveries in a year for a tenner!   Will make me more confident about going out on my own over the next 12 months knowing that if I have any kind of issue and I'm far from home I can ring Green Flag and get taken home.   We didn't really buy very much, a pair of gloves each, a cap for Shaun and arm warmers for me (my nice ones were wrecked during the fall earlier in the year) and some cycling tshirts from Saddle Rags.

We also signed up for Gousto boxes at half the normal price (I'm blogging whilst waiting for the first box to arrive!)  I'll let you know how we got on with it next week when we've had our 3 meals.  It seems quite simple and if we don't like it we don't have to do anything to stop another box arriving.   I quite like the look of the whole scheme - let's face it I'll still have to go shopping for food and it means we get a nice mid-week treat instead of having to go out (although it would be nice to go out out).

There were a lot of stands offering cycling holidays and cycle hire abroad - food for thought so we bought home loads of brochures.   We left the show at about 4.30pm and headed back to the campsite.   We were both really tired and whilst I was happy to cook dinner Shaun decided we'd stop off at a pub and have dinner there.   We spotted The Swallows Nest, a Vintage Inn pub not far from the campsite.   Highly recommended, the food was delicious.

It was a lovely weekend - and we've already planned to go back to Clent Hills next year for a little road trip.
Posted by LilB at 05:12