It was my birthday last Saturday - on Friday I'd taken cakes into work and had lots of birthday wishes and a couple of cards which was nice, for a change!   After I finished work at 1pm I went along to the Brighton Marathon Expo to meet up with Alma who was collecting her race pack.   It was great to meet some of my twitter family too, Kiernan and Dawn were having a coffee next door and Giselle, Louise and Amy were waiting at the Centre.   Thanks for a great afternoon everyone, hopefully we can meet up again soon!

In the evening we met up with some friends we haven't seen for years - it was a great evening with lots of laughter and rather too much wine.  Saturday left me a little hungover which doesn't happen often!   On Saturday I opened loads of lovely birthday cards and a new pair of trail shoes - Adidas Kanadia 5 in a lovely colour - from Shaun which he bought as I've entered the Bedgebury 10k trail run in July.  More on those later!   Danni gave me some lovely new dog walking shoes in a rather pretty shade of purple ! 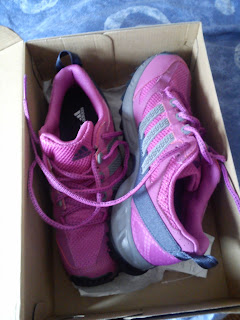 We didn't really do very much during Saturday - the weather was pretty ropey so I spent the day indoors doing jobs around the house and relaxing.  In the afternoon I took Archie for a walk in the rain - happy birthday me !   In the evening we went to The Juggs, a local pub who had sent me a voucher for a free meal on my birthday - I only had 1 glass of wine as Sunday was going to be an early start and an important job had to be done.

On Sunday we got up way too early for a Sunday morning and headed to our cheering spot for the Brighton Marathon just after the 15k mark at Ovingdean/Rottingdean.  The weather wasn't particularly nice and I was very glad that I'd warn my waterproof coat.  Danni got practicing with her vuvuzela blowing 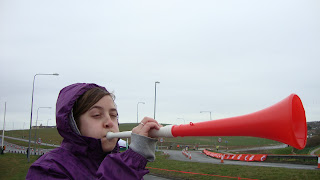 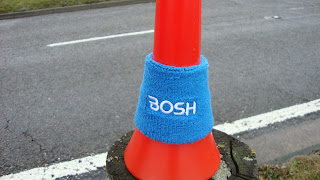 The cavalcade came through at about 9.30 - there were more motorbikes, scooters and minis to celebrate the cult film Quadrophenia. 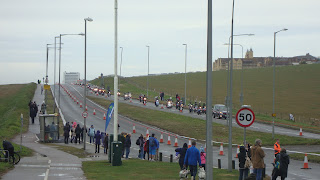 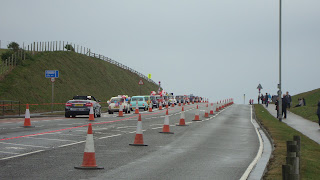 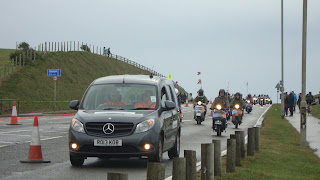 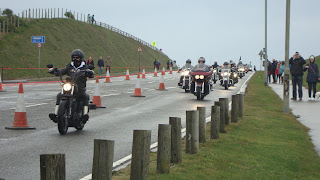 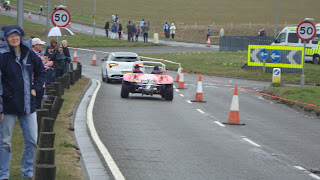 The lead group came through about 10/15 minutes later 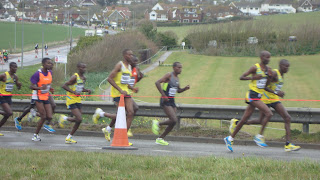 I didn't get any photos of the masses this year as I was too busy cheering, blowing and supporting.  My brother and his girlfriend and lots of twitter friends were running and it was great to see so many of them who made themselves known by shouting back at us.  I gave Tracey (Moggers) a massive hug when she came past.   Some great reactions from everyone to the noise we were making too, it's always good to know that your support is helping people to get through a tough part of the race!  Jo and Louise told us the vuvuzela could be heard for miles - great exactly the volume we were hoping for.

The runners started to thin out after 3 hours or so, we stayed for a bit longer to see some of the slower runners and cheer them along too, some were really suffering.  It was good to finally meet Pete Alton who is running 25 marathons in aid of Breakthrough Breast Cancer.   Our prize for the best costume this year goes to the two donkeys who were raising funds for SPANA. 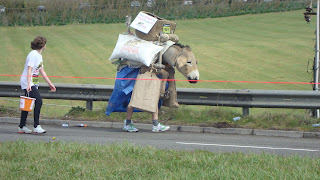 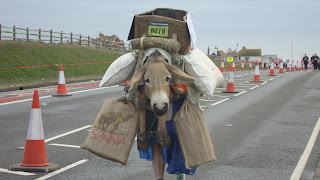 Archie also enjoyed himself very much and barked for 3 hours solid as the runners came by - not quite sure what he made of the donkeys! 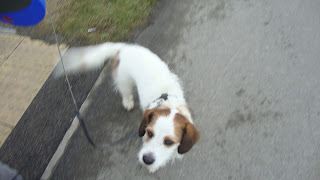 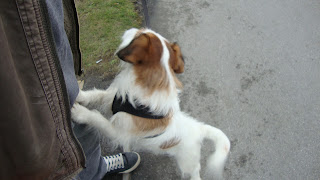 After the marathon we headed back home, later finding out that a young man had died.  Extremely sad news.

Monday night came the horrific news of deaths and injuries at the finish of the Boston Marathon.   The pictures and reports during the evening were extremely upsetting and after half an hour of watching I had to turn it off and watch something else.   Twitter was going absolutely nuts so I had to turn that off too.  It's hard to comprehend why anybody would target such an amazing event.

Today I christened my new trail shoes and took them for a spin along the riverbank where I walk Archie most days.  The ground is a mixture of gravel, grass, mud, and massive puddles so a good test for them!  I also wanted to run to show my support for the victims of the Boston Marathon bombing.   I really enjoyed it, much easier on the feet, apart from tripping on a tree root and hurling myself almost into a load of brambles.   I had to stop a few times, one to re-tie my laces which had got caught on something and undone themselves and also to say hi to a few dog walking friends.   A nice 5k in 40 minutes.  I need to remember to pick my feet up and not "shuffle" so much though.  The shoes felt good, although I think I will have to choose socks more carefully - my feet got quite hot.

So that's it for now.  My next event is Brighton Heroes Run 10k in May,  Alma and I are dressing up as Batgirl.  Costume arrived today, I need to get off my backside and get training.
Posted by LilB at 13:04