Celebrate Good Times - A Catch Up !

March & April is always a busy time of birthdays and Easter.   The first birthday of note is my Dad's - this year was an extremely special one - his 70th. 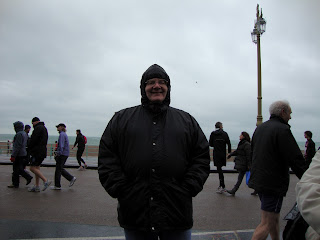 Dad at a particularly wet Brighton Half a couple of years ago.
It was a lovely day and instead of having a party Dad had chosen a pub lunch with the family.  Apparently there aren't any decent pubs near them so we booked a table for 7 people at the Plough & Harrow (mine & Shaun's regular haunt when dog walking & mentioned in previous blogs).  Afterwards we all headed home for birthday cake and a cup of tea.  Steve & Jo had made a lovely cake - Dad had requested chocolate so that's what he got.  A chocolate cake covered in Smarties! 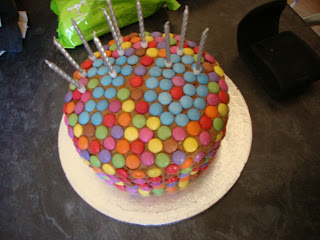 We also celebrated the 1st year of Archie's adoption.  Archie, my gorgeous, clever Jack Russell cross came from Raystede at the end of March 2011.   We've had so much fun with him, and been on some lovely walks - we really are lucky to have him.   He's our second rescue dog - our first was a black terrier cross called Magic who was a bit highly strung, but Archie is completely the opposite.  He loves walking, thankfully.  The only thing he doesn't like is travelling in the car. 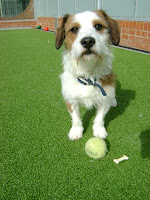 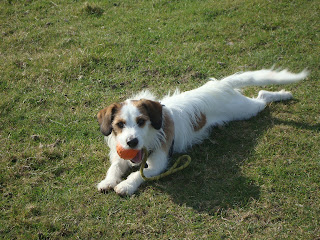 On 4th April we went to see David Essex in his touring show All The Fun of the Fair.

I have seen David in many tours and shows over the years and luckily Danni and Shaun like him too.  This production didn't disappoint and cleverly includes many of his songs around a sad story of fairground life.


For Easter weekend we'd arranged for Mum & Dad to look after Danni & Archie so that we could have some time to ourselves.  We're usually away on holiday during the school Easter break but not for the second year on the trot!   So, hotel booked in Maidstone (doesn't sound very exciting does it?) for Good Friday.  We did some shopping - Maidstone is a great place for that pastime. We had a lovely evening meal at a restaurant we'd spotted during the afternoon, Wildwood.  An original Italian menu and very reasonably priced.  A lovely atmosphere and great service.


Shaun had set my alarm early Saturday morning so that I could go for a run.  The Travelodge is on the River Medway so it was fairly easy to leave the hotel and just run for as far as I wanted to.  After a while I got a bit scared, there was no-one about and Shaun was stuck back in the hotel as I had the key!  A nice 3 mile run though, flat with a trail feel to it - some made up concrete paths, cinder paths, mud track, and the weather was perfect. 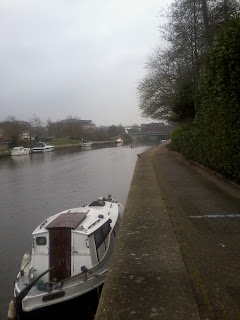 After breakfast we drove up to Essex to spend Saturday & Sunday with Paula & Dave, who we met a few years ago whilst on holiday.  We haven't seen them since the end of last year so it was great to spend some time with them.   Lots of food, alcohol & laughing!


Sunday night was back to Maidstone Travelodge, however Shaun had left my running kit in the car so no run along the other side of the river bank on Monday morning, luckily it was pouring with rain.  Perfect excuse for another shopping trip and another run sometime in the future!!!
Next birthday celebration was mine.  Unfortunately I had to go to work but to soften the blow I took in cakes for everyone and treated myself to a Costa!  Lots of lovely cards from friends and family, some lovely birthday wishes from friends on Facebook and my twitfam, some Body Shop smelly from Danni and Shaun bought me a new running top and a pair of 5k weights. I've been using his but keep spiking myself in the leg with the end of the bar. 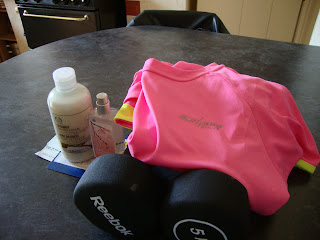 A lovely day finished off with a meal with Shaun & Danni at a local pub.


Today was Brighton Marathon - dusted off the vuvuzela and made our way to Ovingdean where you get a fantastic view of the action in 3 directions.  Between 15,000 and 18,000 runners (depending on who was giving the stats!) two of which were my brother and his girlfriend 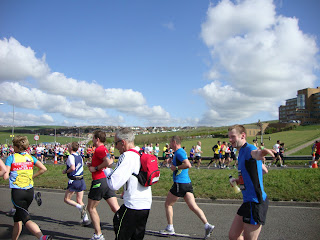 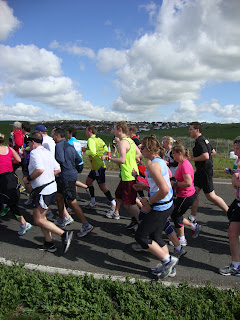 Another birthday which needs a mention is the massive milestone that is Danni's 16th.  Hard to believe that the tiny little dot that arrived a few minutes after midnight on 19th April has grown up - more on Danni's mammoth year later as we have exams, a prom and her first big gig without her mum to get through!